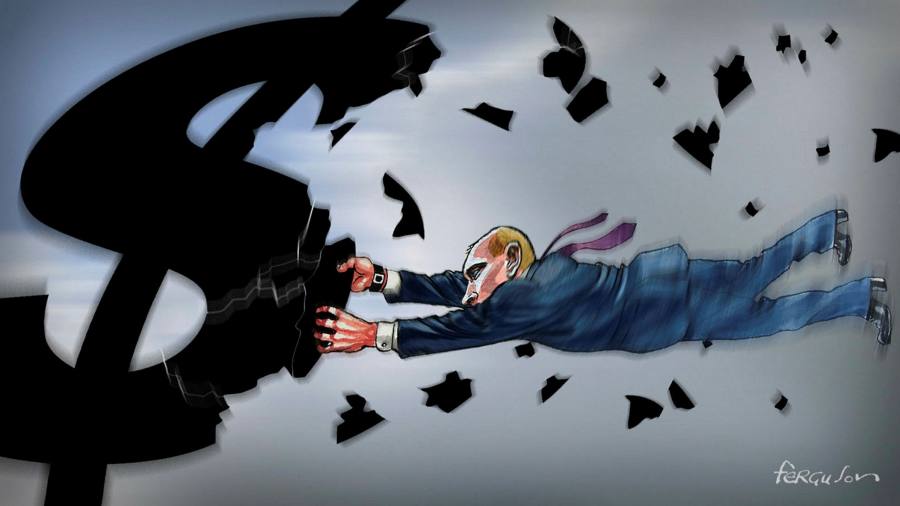 At the end of January, Russia held foreign currency reserves worth $469bn. This hoard was born of the prudence taught by its 1998 default and, hoped Vladimir Putin, also a guarantee of its financial independence. But, as his “special military operation” in Ukraine began, he learnt that more than half of his reserves were frozen. His enemies’ currencies ceased to be usable money. This action is not only significant for Russia. A targeted demonetisation of the world’s most globalised currencies has big implications.

Money is a public good. A global money — one that people rely upon in their cross-border transactions and investment decisions — is a global public good. But the providers of that public good are national governments. Even under the old gold exchange standard, that was the case. In our era of fiat (government-made) currency, since 1971 that has been even more obviously the case. In the third quarter of 2021, 59 per cent of global foreign currency reserves were denominated in dollars, another 20 per cent in euros, 6 per cent in yen and 5 per cent in sterling. China’s renminbi still made up less than 3 per cent of global reserves. Today, global monies are issued by the US and its allies, including small ones. (See charts.)

This is not the result of a plot. Useful monies are those of open economies with liquid financial markets, monetary stability and the rule of law. Yet the weaponisation of those currencies and of the financial systems that handle them undermines those properties for any holder who fears being targeted. Sanctions on Russia’s central bank are a shock. Who, governments ask, is next? What does it mean for our sovereignty?

One can object to the west’s actions on narrowly economic grounds: the weaponisation of currencies will fragment the world economy and make it less efficient. That, one might respond, is true, but ever more irrelevant in a world of severe international tensions. Yes, it is another force for deglobalisation, but many will ask “so what?”. A more worrying objection for western policymakers is that using these weapons might damage them. Will the rest of the world not rush to find ways of transacting and storing value that circumvent the currencies and financial markets of the US and its allies? Is that not what China is trying to do right now?

It is. In principle, one could imagine four replacements for today’s globalised national currencies: private currencies (such as bitcoin); commodity money (such as gold); a global fiat currency (such as the IMF’s special drawing rights); or another national currency, most obviously China’s. The first is inconceivable: the market value of all cryptocurrencies is currently $2tn, a mere 16 per cent of world foreign exchange reserves, while transacting in cryptocurrencies directly is impossibly cumbersome. Gold can be a reserve asset, but is hopeless in making transactions. There is also no chance of agreeing on a global currency of sufficient weight even to replace reserves, let alone be a global transactions vehicle.

This leaves another national currency. An excellent recent pamphlet by Harvard’s Graham Allison and colleagues on The Great Economic Rivalry concludes that China is already a formidable peer competitor of the US. History suggests that the currency of an economy of its size, sophistication and integration would become a global money.

So far, however, this has not happened. That is because China’s financial system is relatively undeveloped, its currency is not fully convertible and the country lacks a true rule of law. China is very far from providing what sterling and the dollar provided in their heyday. While holders of the dollar and other leading western currencies might fear sanctions, they must surely be aware of what the Chinese government might do to them, should they displease it. As important, the Chinese state knows that an internationalised currency requires open financial markets, but that would radically weaken its control over China’s economy and society.

This lack of a genuinely credible alternative suggests that the dollar will remain the world’s dominant currency. Yet there is an argument against this complacent view, laid out in Digital Currencies, a stimulating pamphlet from the Hoover Institution. In essence, this is that China’s Cross-Border Interbank Payment System (Cips — an alternative to the Swift system) and digital currency (the e-CNY) might become a dominant payment system and vehicle currency, respectively, for trade between China and its many trading partners. In the long run, the e-CNY might also become a significant reserve currency. Moreover, argues the pamphlet, that would give the Chinese state detailed knowledge of the transactions of every entity within its system. That would be an additional source of power.

Today, the overwhelming dominance of the US and its allies in global finance, a product of their aggregate economic size and open financial markets, gives their currencies a dominant position. Today, there is no credible alternative for most global monetary functions. Today, high inflation is likely to be a greater threat to trust in the dollar than its weaponisation against rogue states. In the long run, however, China might be able to create a walled garden for use of its currency by those closest to it. Even so, those who wish to transact with western countries will still need western currencies. What might emerge are two monetary systems — a western and a Chinese one — operating in different ways and overlapping uncomfortably.

As in other respects, the future promises not so much a new global order built around China as more disorder. Future historians may view today’s sanctions as another step on that journey.