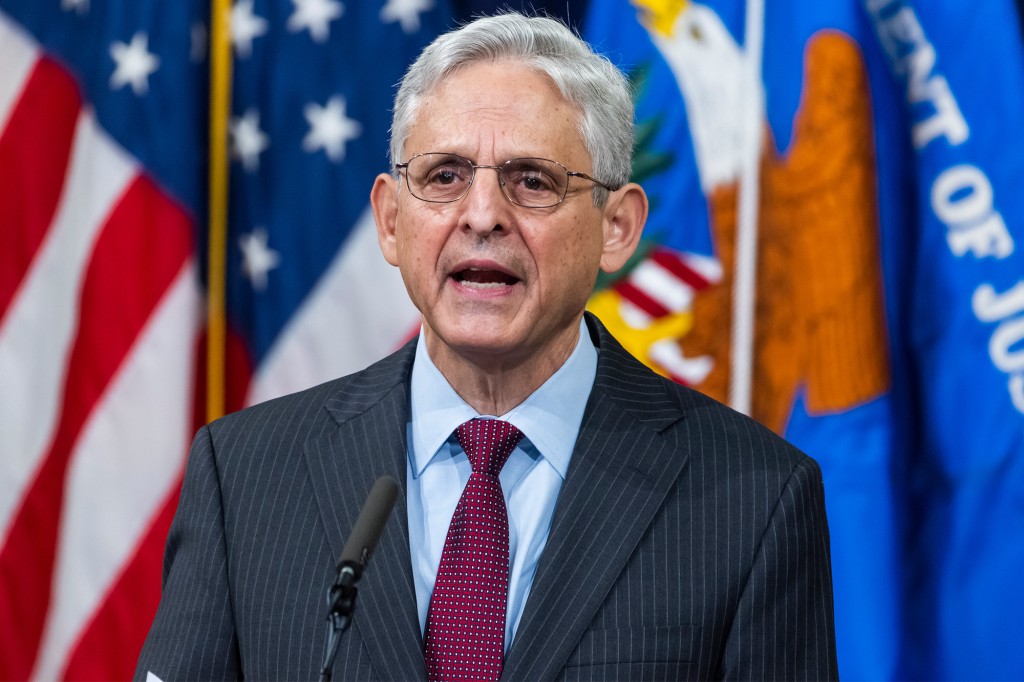 AG Merrick Garland must call off war on parents: Devine

It’s time for Attorney General Merrick Garland to retract his memo siccing the FBI onto moms and dads.

Now that the National School Boards Association has recanted the scurrilous letter which he admitted was the sole basis for his decision to treat parents like domestic terrorists, he must call off the dogs.

He must recall the DOJ’s powerful counterterror arm, the National Security Division, from its new role of spying on parents exercising their First Amendment rights at school board meetings.

In his woeful impersonation of Sgt. Schultz in a House Judiciary Committee hearing last Thursday, Garland vowed that FBI agents will not be attending local school board meetings.

But according to one northern Virginia mom, the feds showed up in force that very night to spy on a group of 25 parents and grandparents who were protesting outside a Fairfax County school board meeting.

“We had several unmarked federal government vehicles there watching us, and we had DHS [Department of Homeland Security] in marked vehicles and we had a helicopter overhead [which] circled for about 30 minutes and were shining their spotlight down on us,” Stacy Langton told WMAL radio Friday, after posting a photograph of the vehicles on social media.

“It was so over the top,” said the mother of six.

“Both of these books include pedophilia, sex between men and boys,” she said in a video circulated online by Asra Nomani of activist group Parents Defending Education.

She was interrupted by two school board members before her two-minute speaking slot had expired. Her microphone was cut off while other parents gave her a standing ovation.

A man can be heard yelling at school board members on the video: “You are sick!”

Another mom shouts: “This is child pornography and every one of you should be arrested for allowing this bullcrap to be . . . infecting the minds of these children.”

As board members walk off stage, parents chant “Shame!”

So, yes, it was a raucous meeting. But are parents supposed to meekly accept that their children are subjected to this sort of filth?

Apparently. This is the whole point of Garland’s notorious memo: to place a chill on free speech. It was designed to frighten parents into not showing up at school board meetings to complain about ideological propaganda being shoved down their kids’ throats, whether critical race theory, gender fluidity, transgender bathrooms, pornography, or other pet perversions of the extreme left.

When grilling Garland in Congress last week, Rep. Jim Jordan was prevented by committee chairman Jerry Nadler from playing a video showing parents speaking articulately and passionately at school board meetings across the country this year.

“Telling my child, or any child, that they are in a permanent oppressed status in America because they are black is racist,” said one mother.

“I am not oppressed,” said one dad. “I have three children and they are not oppressed either . . . Racism in America would by and large be dead today if it were not for certain people and institutions keeping it on life support . . . Sadly one of those institutions is the American education system.”

“My 5-year-old is being peddled transgender books in her library,” said another dad. “Teenagers are being served pornography under the guise of young adult literature . . .

“Do something,” he exhorted board members.

Nadler banned the video on a spurious technicality, but Garland should watch it anyway, since he seems clueless about the genuine concerns of parents.

He was not even aware of the widely publicized case of a Loudon County dad arrested at a school board meeting while complaining that his 15-year-old daughter allegedly had been raped in a school bathroom by a boy in a dress.

That’s extraordinarily remiss of the attorney general, since the case was one of the few cited in the NSBA’s Sept. 29 letter to the president as evidence of a “disturbing spike in harassment, intimidation, and threats of violence” against school board members.

The speed with which Garland wrote his memo five days later, launching anti-terrorist action against moms and dads, was remarkable, since he admitted to Congress that he had seen no “body of evidence” showing an “uptick” of violence at school board meetings.

His decision was due entirely to the powerful nature of the NSBA letter, he said, and a few “newspaper reports.”

On Friday, the NSBA apologized for its inflammatory letter: “There was no justification for some of the language included.”

The backdown only came after Nomani and the Washington Free Beacon released e-mails showing NSBA President Viola Garcia and Interim CEO Chip Slaven had been secretly talking with White House staff for “several weeks” before sending the letter to President Biden requesting the Patriot Act be deployed to investigate parents as potential “domestic terrorists.”

The entire scheme was a failed attempt to equate parents protesting against school boards with the Capitol Hill rioters. It was authoritarian overreach in service of Joe Biden’s concerted efforts to smear all his political opponents as domestic terrorists.

Garland has egg on his face and the only way out is to admit his memo was wrong.

“Saturday Night Live” never fails to fall flat on its face with its Joe Biden skits. There is zero likeness to the president from any of its actors — and they had three on the weekend.

How hard is it to mimic his wandering high-kneed gait, for instance, or his “C’mon, man” refrain, or his irate finger-pointing. His frozen jet-pack hands from Thursday’s CNN town hall, and his rebooting robot routine, were tailor-made for gentle comedy. But when a comedy show sacrifices humor for political correctness it’s no wonder its ratings stink.