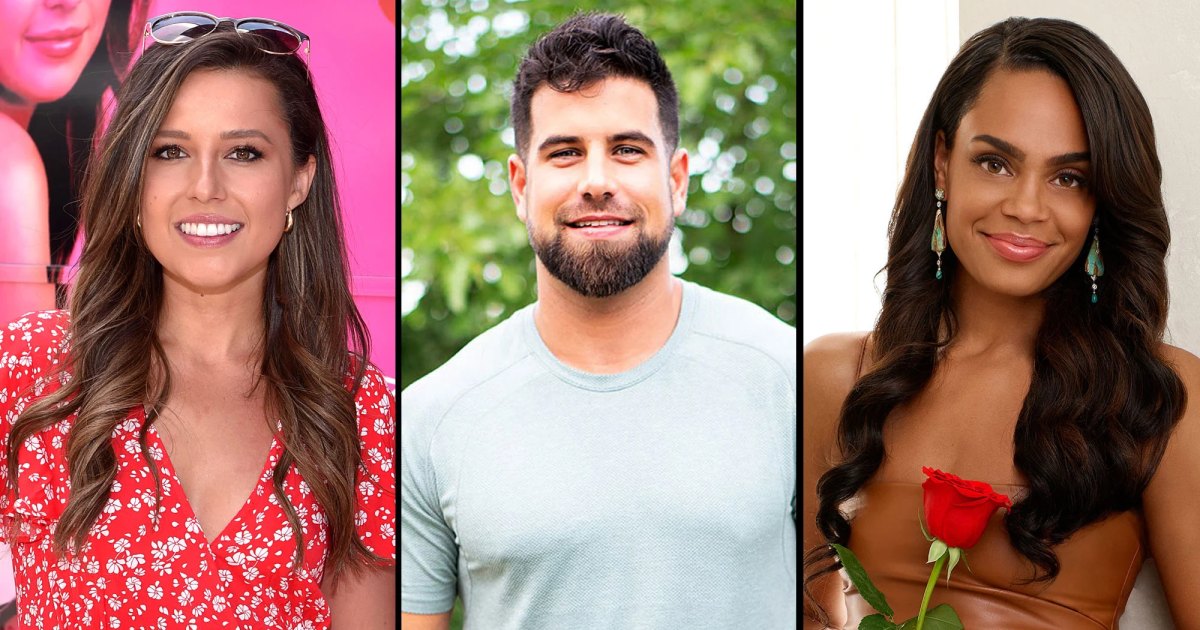 Just as Michelle Young’s journey is heating up, Katie Thurston’s relationship with Blake Moynes has fizzled. Pop culture guru Ryan Bailey joins Us Weekly’s “Here for the Right Reasons” podcast to recap the Tuesday, October 26, episode of The Bachelorette — and the “So Bad It’s Good With Ryan Bailey” podcast host can’t help but let the Bachelor Nation breakup affect his season 18 viewing.

“Do you think that producers are like, ‘Please don’t do this, please don’t do this on the second week?’” Ryan begins on the Wednesday, October 27, episode of the “Here for the Right Reasons” podcast. “I feel like they should have waited to break up until after this because now I’m like, ‘Hey guys, I’m starting to not believe in love. I’m starting to believe that you guys don’t actually know what you’re doing over there.’ … We all want to believe in love, but you guys do not have a good track record.”

He then joked: “We need some people to last and if they don’t last, I want to punish them for even putting us through that. They need to stay together or they go to jail.”

Katie, 30, and Blake, 31, who got engaged during the August finale of The Bachelorette, announced their split on Monday, October 25, via a joint statement.

“It is with mutual love and respect that we have decided to go our separate ways,” the duo wrote. “We are so grateful for the moments we shared together and the entire journey that has unfolded this year, but we ultimately have concluded that we are not compatible as life partners, and it is the most caring choice for both of us to move forward independently.”

A source subsequently told Us that the pair “definitely tried” to make their romance work.

“They just couldn’t make the long-distance [relationship] work,” the sider said. “Katie really missed Blake once he left and they would get into little arguments, but at the end of the day, Katie wished he would be with her more.”

Michelle, meanwhile, is down to 19 suitors after two episodes. The Minnesota teacher, 28, became visibly emotional during Tuesday’s episode after Jamie Skaar claimed that the group was questioning her pre-show relationship with Joe Coleman. While she shut down speculation, explaining that they briefly exchanged DMs “years ago,” the drama will continue into next week.

“I don’t know who conjured this up, but I feel like this person will make some kind of other mistake and will eventually be exposed,” contestant Romeo Alexander told ABC cameras. “What’s still a big question mark in everyone’s mind is, who spoke to Michelle?”

For a complete recap of Tuesday’s episode, listen to Us Weekly’s “Here for the Right Reasons” podcast.