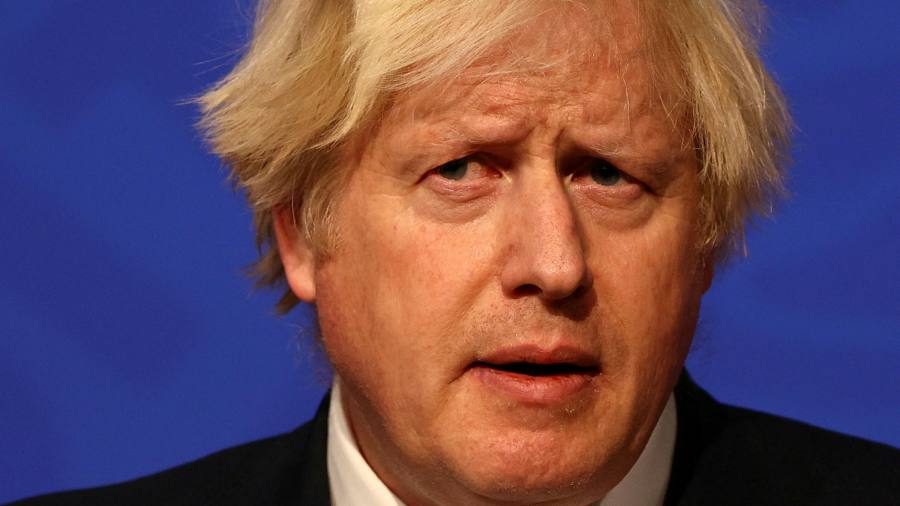 Boris Johnson moves to Plan B to control Omicron spread

Boris Johnson on Wednesday unveiled sweeping new coronavirus restrictions to combat the rapid spread of the Omicron variant as he apologised “unreservedly” for a leaked video that showed his aides joking about Christmas parties during lockdown.

The new restrictions for England include guidance to work from home from Monday, while masks will be mandatory for all indoor venues from Friday except for pubs and restaurants.

Covid passports will be introduced for large indoor and outdoor gatherings, while Johnson also flirted with the idea of greater compulsion for vaccines to avoid an endless cycle of restrictions.

He said a “national conversation” was needed and the country could not “keep going indefinitely with restrictions on people’s way of life just because a substantial number of people have not got vaccinated”.

Justifying the new restrictions, which he described as “proportionate and responsible”, Johnson said: “We know the remorseless logic of exponential growth could lead to a big rise in hospitalisations, and therefore sadly in deaths.”

Chris Whitty, England’s chief medical officer, warned that the Omicron variant was spreading “extraordinarily fast” with infections doubling every two to three days. There are currently 568 cases of the variant in the UK, but the true number is thought to be much higher.

Early projections of how Omicron will spread, provided to the government’s Scientific Advisory Group for Emergencies, suggested daily hospitalisations “may reach 1,000 per day or higher in England by the end of the year” and continue to be on an upward trajectory.

Without any interventions, the scale of the winter peak “could reach several times this level”, according to official minutes released on Wednesday. “The peak is highly likely to be higher than 1,000 to 2,000 Omicron hospital admissions per day without intervention to slow the speed of increasing infections.” the committee noted.

The latest restrictions were introduced much earlier than had been anticipated, prompting one Tory MP, William Wragg, to claim they were being used as a “diversionary tactic” to distract attention from Johnson’s political problems over Number 10 parties. Johnson rejected that claim.

Sajid Javid, health secretary, was heckled with calls of “resign” in the Commons when he announced the new restrictions to MPs. Steve Baker, chair of the Covid Recovery Group of lockdown-sceptic MPs, warned the restrictions “could scarcely be more serious for the future of our lives in this country”.

Chancellor Rishi Sunak voiced concerns at Wednesday’s cabinet meeting over the economic costs of further restrictions, but Michael Gove, levelling up secretary, said he feared they did not go far enough, according to officials briefed on the meeting.

But the official added that Sunak was relieved that the hospitality industry was excluded from the Covid certification scheme as well as new mask restrictions, adding: “Most of the measures are low-impact from an economic point of view.”

Meanwhile Johnson announced that cabinet secretary Simon Case would investigate media reports that a festive gathering was held in Number 10 on December 18 last year when London was under stringent Covid-19 restrictions, and such parties were banned.

The prime minister apologised “unreservedly” for offence caused by the footage. “I understand and share the anger up and down the country at seeing Number 10 staff seeming to make light of lockdown measures.”

Labour party leader Sir Keir Starmer accused Johnson of “taking the public for fools” over Downing Street parties, stating that the facts were “clear as day”. He told MPs “They knew there was a party, they knew it was against the rules, they knew they couldn’t admit it, and they thought it was funny.”

Johnson added that following the media reports, he had been repeatedly told that there had been no Downing Street party and no Covid rules had been broken. He said any relevant evidence from Case’s inquiry would be handed over to the Metropolitan Police.

However, the inquiry will not examine reports of other Downing Street parties on November 13 and November 27, which would have also breached Covid restrictions on gatherings.

The Metropolitan Police on Wednesday announced it would not investigate the party allegations due to an “absence of evidence” and the force’s policy not to investigate retrospective breaches of coronavirus regulations.

The new restrictions and Johnson’s handling of the row over Christmas parties has tarnished his standing in the Conservative party. One minister described the situation as “completely appalling”, adding: “I feel really quite repulsed by it and cannot believe they allowed it to get this place.”

The minister added that MPs were increasingly discussing whether Johnson’s time in power could be drawing to a close. “In a way I haven’t heard before, colleagues I wouldn’t have expected are talking about what the end-game might be for the PM.”