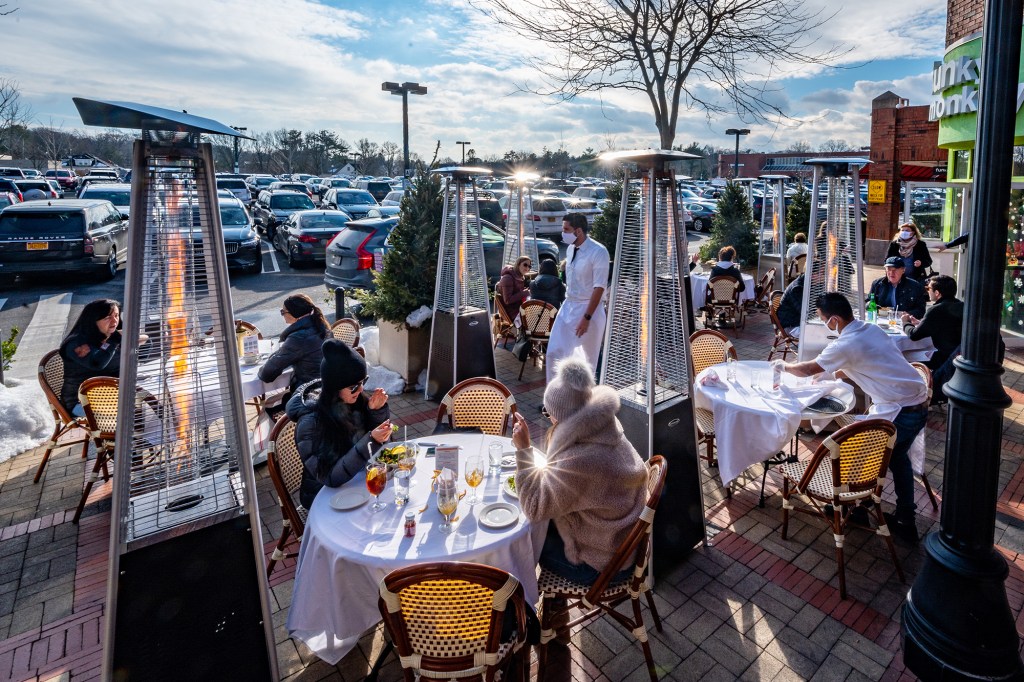 The cranks suing the city to end outdoor street dining over issues like noise and garbage can save their dough on legal fees, because City Hall is about to do the job for them.

Last month, the FDNY, backed by Mayor de Blasio, irrationally banned the use of propane heaters at outdoor restaurants. (Are any of the actions by the worst mayor in Big Apple history not irrational?). The ban will likely spell the end for thousands of places that relied on extra money from outdoor seating to help make up for last year’s catastrophic losses caused by the pandemic.

Despite all that, New York’s Bravest proclaim that propane heaters “pose a high risk of death and injury.” Their concern for public safety is rich when several thousand firefighters continue to refuse the COVID vaccine, thus endangering everyone they meet and forcing the shutdowns of some firehouses. (Yes, we love them for saving lives but that is, after all, their job.) The FDNY didn’t respond to questions about the propane ban.

But Derek Kaye, who owns several locations of the Takumi Taco chain as well as NYC Propane Delivery, which sells propane tanks to hundreds of restaurants, summed up the challenge: “Most restaurants don’t have the extra power available for electrical heaters and they don’t have the ability to add any more electrical capacity.” As for natural gas, only a very few places — such as on Broadway’s “restaurant row” across from Lincoln Center — have the means and landlord support to use it.

One more picky point about electric heaters that Kaye is too diplomatic to mention: They don’t work. Last winter at Marea, I was half-scalded to death when the red-glowing towers were set too close to my table one night and frostbitten another evening when they were pointed the wrong way.

The mayor ordered the FDNY to waive its long-standing ban on propane at restaurants last year. But the department held a grudge. It tormented owners who bought propane tanks on the strength of the city’s announcement, only to learn that they had to “go through hoops” to actually use them, as Mermaid Inn co-owner Danny Abrams found.

Abrams bought 15 tanks but, “The FDNY came and we had to get rid of them all.” He substituted underperforming electrical units above tables. At his Upper West Side Mermaid Inn, outdoor customers “kept their torsos warm, but they complained that their legs, feet and toes were freezing.”

Some places stuck with propane despite the hurdles. Now the tanks are history. The ban’s last-minute timing, just before the colder weather hits, has left owners fuming over money they’d wasted on propane heaters in the reasonable expectation that the waiver, which expired last spring, would be renewed.

Kaye suggested a reasonable compromise: Let restaurants apply for propane use under careful guidelines, including having the tanks stored off-premises overnight. He has yet to hear back from City Hall.

De Blasio caved to the FDNY despite surely knowing that the ban would crush restaurants this winter.

You might well ask: Why would he bless a rule that could destroy the alfresco dining program he created — one of his precious few genuine accomplishments?

Don’t think too hard: Government bureaucracies love to throw their weight around just for the thrill of it and elected officials are usually loath to resist. The city and state routinely adopt policies that are guaranteed to negate others. Think of special lanes to make buses move faster while bike lanes and “plazas” slow them to a crawl.

New York City Hospitality Alliance executive director Andrew Rigie accurately observed, “The reality is that many restaurants are still struggling to recover from the pandemic and some of their customers still aren’t comfortable dining indoors because of COVID-19 or they’re prohibited from eating inside because they’re unvaccinated.”

Thanks to City Hall, those customers are chopped liver, served cold.

The heartbreak behind this Amy Winehouse dress up for auction