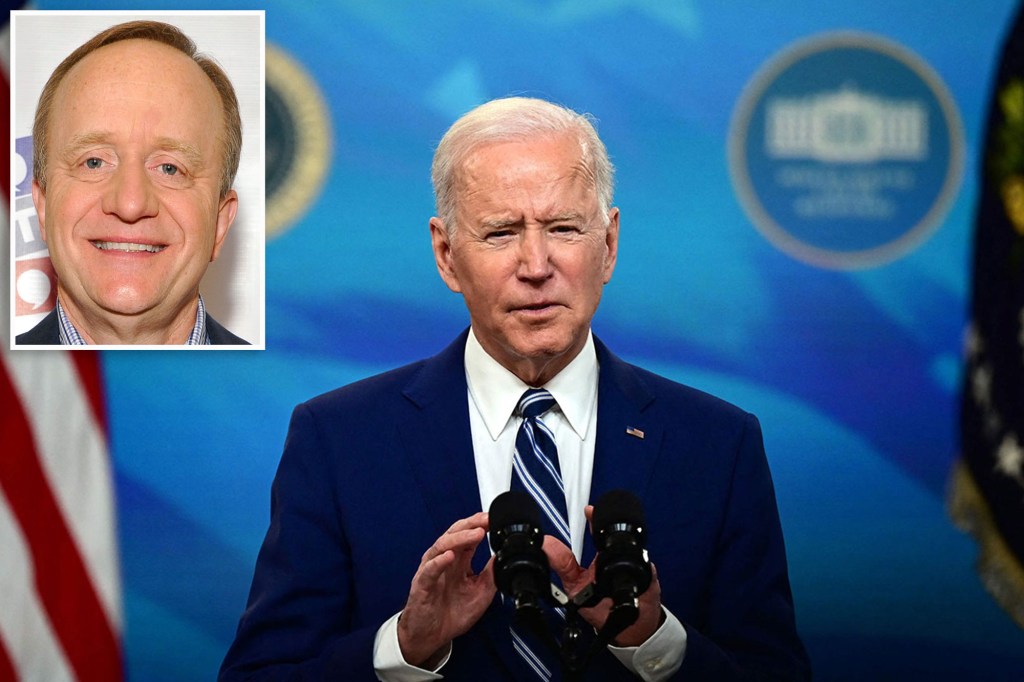 This is not a news flash: Modern Democrats are addicted to the blame game.

When they aren’t pointing fingers at Donald Trump, Republicans and the pandemic for everything that goes wrong under the sun, they pick on banks, oil companies and even supermarkets to explain soaring prices on consumer goods.

Big Banks, Big Oil and now Big Grocery have bull’s-eyes on them. Next in line are the amorphous supply chains, which are appealing targets precisely because they are faceless and nameless. Nobody rises to defend supply chains.

Yet despite the Herculean efforts to create villains to rescue the drowning Biden administration, there is no sign of a lifeboat on the horizon and the president’s approval ratings continue to sink into the vasty deep.

But nothing can be the president’s fault, even one in obvious decline, so the search goes on for someone or something else to blame. Comes now a novel idea from one of the party’s prized strategists.

Paul Begala, who cut his political teeth in the glory days of Bill Clinton and acts as a permanent party mouthpiece, has a hunch about what’s ailing the White House. The problem, he says, are Democrats’ voters.

“I think the problem for the Democrats right now is not that they have bad leaders. They have bad followers, OK?”

That’s how Begala sees the inability of Biden and party leaders to pass the two federal election bills they have been flogging for months. To pass them in the 50-50 Senate, they would first need to break the filibuster rule, and two Dems — Sens. Krysten Sinema of Arizona and Joe Manchin of West Virginia — have said no, no and no.

Trying to explain that failure and rebut charges that Biden has not tried hard enough to convince Sinema and Manchin the election bills are uniquely important, Begala, on CNN, added: “Those of us who want to save voting rights — we need to get to work. I do think Biden is putting everything behind this, but he needs better followers. He needs all of us in the game as well.”

In sports terms, this is like firing all the players on a bad team instead of just the coach.

Still, Begala’s view does have one selling point.

Stripped of its virtue veneer, the idea illustrates why Biden, Nancy Pelosi and Chuck Schumer have spent all their political capital trying to let Washington overrule states and set all election rules.

They are using charges of racism and “voter suppression” as hammers, but the real issue is that Dems don’t have confidence they can win close elections without taking over state operations, as they did in 2020. For those who subscribe to this thinking, the only reliable path to victory lies in universal mail-in-ballots and removing all safeguards to ballot integrity, including identification requirements.

The formula also includes another pot of virtually unlimited money from Big Tech oligarchs like Mark Zuckerberg, who spent at least $419 million in 2020.

The implications of this game plan are numerous. For example, when matched up against Biden’s record and poll numbers, Begala’s idea reflects the belief there is little hope among White House insiders that the president can recover among swing voters. For good reason.

Last week’s Quinnipiac poll, which reported his overall approval number at a dismal 33 percent, found that just 25 percent of independents like Biden’s job performance. That’s a disaster in the making — unless Dems can turn out virtually every American who ever even thought about voting Democratic, including those who are not registered.

In effect, the party has given up on broadening its appeal and settled on digging deeper into its base, and coupling that focus with letting Washington make the rules. Indeed, as Biden strangely confessed in a visit to the Capitol last week, his election-law push is “not just whether or not people get to vote. Who counts the vote? That’s what this is about. That’s what makes this so different than anything else we’ve ever done.”

Recall, too, that this is the same party that’s OK with requiring vaccine passports and photo identification to eat in a DC or New York restaurant, but believes any ID requirement for voting is racist.

As others have noted, by putting the emphasis on controlling the vote-counting process, Dems are setting up an excuse if they lose this year’s midterms and laying the groundwork for calling the outcomes illegitimate.

Hmmm, but wouldn’t that be a distinction without a difference from what Trump has done about 2020? And aren’t the former president’s charges about a stolen election endangering democracy, as Biden, The New York Times and CNN continually tell us?

Double standards — without them, the left wouldn’t have any standards at all.

As for Trump, some Dems are plotting another route to stop him from running in 2024. The growing demand that Attorney General Merrick Garland consider prosecuting Trump over the Jan. 6 Capitol riot last year is based on the hope that conviction of a crime would get him banned forever from federal office.

Supporters of the effort cite the 14th Amendment, which says nobody who took an oath supporting the Constitution can hold federal office again if he later “engaged in insurrection or rebellion” or helped those who did.

Put these efforts together and you get a good picture of what Dems are up to: Control who counts the votes and instead of trying to beat Trump, ban him.

It’s not pretty, but it’s all they have.

That was faster than the uptown local — and smart, too.

Mayor Adams, after insisting subways are safe but there is a “perception” of crime, acknowledged the obvious Tuesday.

It was a wise about-face. The new mayor’s initial claim about “perception” made it seem as if riders are wrong to fear for their safety.

Coming soon after Michelle Go, a 40-year-old woman, was killed when a vagrant allegedly pushed her in front of an arriving train in Times Square, Adams seemed out of touch.

But by recounting his own feelings of unease, the mayor put himself in the shoes of those who don’t have security escorts. Now he must deliver on his promise to ease riders’ fears.

How did he get in?

From the AP: “The gunman who took four people hostage at a Texas synagogue in a 10-hour standoff that ended in his death was checked against law-enforcement databases before entering the US but raised no red flags, the White House said.”

Why not? Given that British intelligence officials investigated the man as a possible “terrorist threat” last year, why were there no red flags? That’s the question.