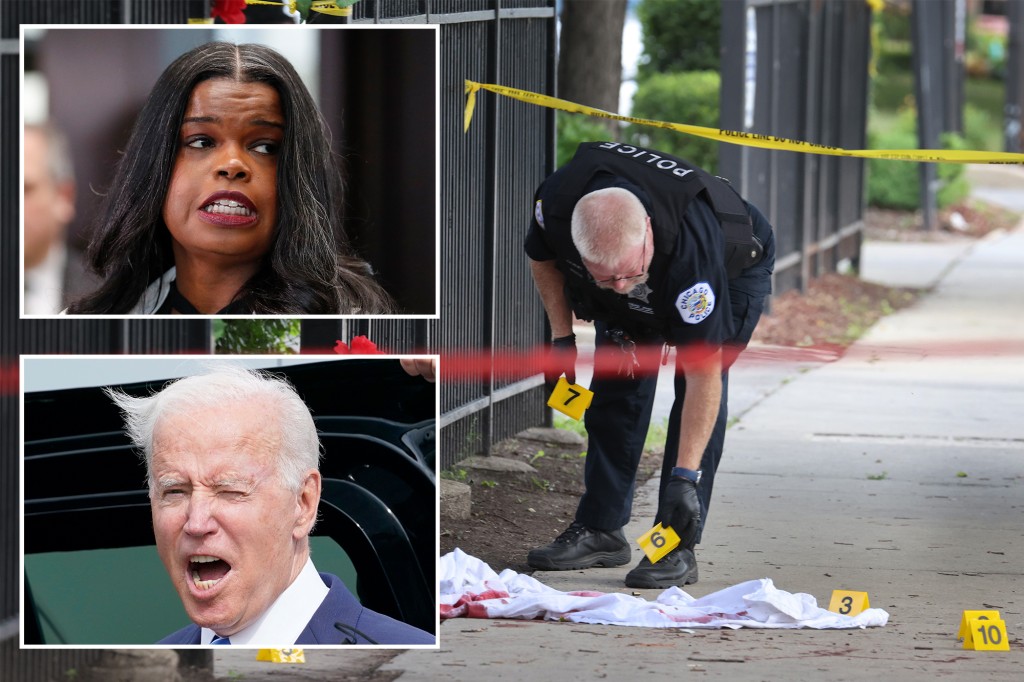 Get real, Joe! The Democrats let Chicago go to ruin

During his visit to the Second City on Thursday, some smart aide should have whispered in President Biden’s ear about what’s really killing Chicago and Illinois:

It’s not the COVID, Joe.

More than 600 people have been murdered already this year, and thousands upon thousands shot, in a dying city, in a failing, corrupt county, in the worst-run state in the nation.

Democrats paved this road to hell over the decades. The public schools fail minorities who need help the most, but the government schools enrich the teachers union that gets out the vote. Hundreds of thousands of black residents have fled for safety, and better schools and others from all demographic groups join them. They vote with their feet.

The criminal-justice system is broken, minority poor are overwhelmingly the victims of violent Chicago crime, but now even downtown becomes a war zone and no neighborhood is safe. People in all neighborhoods, and tourists with money to spend, are afraid to walk the streets at night or drive lest they’re carjacked, and on Chicago expressways some 185 people have been shot this year.

All of America can see.

And President Biden comes to Chicago to applaud himself on his COVID mandate?

Get real for once in your life, Joe. Behold Chicago.

Mr. President, sprinkle some “It’s the violence, stupid,” on your ice-cream cone and I’ll tell you about the politics of violence in Chicago.

Because Lightfoot dared to call out Foxx, whom she foolishly endorsed for re-election, for not filing charges in a series of deadly street shootings, including one caught on video, with cops as witnesses.

Even Sen. Dick Durbin, chair of the Senate Judiciary Committee, says he was almost a victim, relating that the other evening, after having left a restaurant, he and his wife were almost shot in a ­street-gang battle on DuSable Lake Shore Drive.

“I heard a popping sound,” Durbin said. “I didn’t know what it was, but the driver of the car said, ‘Those were gunshots.’ And it turned out to be the car next to us, and the driver was leaning out the window and shooting a gun in the air. He could have just as easily been shooting a gun at us.”

What has happened to Chicago? Here’s what happened:

The George Floyd riots happened. Democrats wanted their voters whipped to a frenzy in 2020, and got what they wanted. Lightfoot and other liberal black mayors across the country stood back as their administrations, and the rule of law in their cities, were devoured by BLM and other elements of the hard Jacobin left that now rules the Democrat Party, with Biden as its empty, titular, wobbling head.

Democrats let the Floyd protests drive chaos. Lightfoot and Gov. J.B. Pritzker, our very own Gov. Commodious Maximus, didn’t want the National Guard in the city at first. They were worried about the optics, they wanted the left wing good and angry, and Donald Trump out of the White House. Chicago has never recovered.

Police were demonized, assaulted and seriously injured. The sense of lawlessness in urban America grew. And unlike the Jan. 6 Capitol rioters, most of the violent in Chicago and other Democratic urban centers were excused. The BLM rioters were not condemned as terrorists and hunted down. Instead, there was a deal:

The deal was the Democrats would buy off the left with that $3.5 trillion Biden/Pelosi spending spree (or is it really $6 trillion?) — the neo-Marxist fantasy that is now failing in Washington.

Federal bailout money came to the cities, and (no surprise) they spent it without imposing structural controls on public-worker pensions and other aspects of bloated government that sucks the life out of taxpayers. And through all of this, the criminal-justice system was failing.

At least Foxx made good on her leftist rhetoric. She dropped more felony murder cases than her predecessor, and Soros got what he paid for.

Foxx also stopped prosecuting shoplifting cases, and as a result, gangs of boosters hit high-end stores, adding to the general feeling that the city succumbed to lawlessness.

And just the other day, just minutes after Mayor Lightfoot and her police superintendent, David Brown, posed for photos at an anti-crime event, telling residents they had control over the violence, there was another gang shooting right where they had posed for publicity pictures.

And then came another shootout, when five suspects in a deadly street-gang battle on the West Side — all of it on video — were released with Foxx’s prosecutors saying there was insufficient evidence.

The rationale was that both sides were “mutual combatants,” an asinine line of reasoning used by Foxx in the past.

I hear that the same idiocy was used when no charges were brought against two cars of shooters on the Dan Ryan Expressway. Their victim was Denise M. Hugelet, 67, a retired special-education teacher, a grandmother from the Southwest suburbs, who was killed in the crossfire while going home from a White Sox game.

If someone prominent were shot, say a senator, would Foxx have been so dismissive and cavalier? Not bloody likely.

Foxx and the cops have clashed over numerous cases where detectives say they develop evidence and Foxx declines to charge. A recent example among many was the Aug. 15 murder of 7-year-old Serenity Broughton. She and her younger sister, Aubrey, were shot while sitting in the back of their parents’ car on the city’s Northwest Side. The little girls were found hugging each other.

Detectives pushed for charges. They reportedly had the suspects’ phones pinged at the scene. Foxx denied the charges. The outraged detective commander tried to override the prosecutor and failed when City Hall stepped in on Foxx’s side.

One like this after another, street gangs carving up Chicago, blood in the streets, anarchy and chaos, until finally, this week, Lightfoot lashed out.

“It’s complicated, for sure, but we really urge the state’s attorney herself to get personally involved, look at the evidence,” said Lightfoot. “And I believe that there are charges that can be brought at a minimum against the individuals who initiated the gunfire. We can’t live in a world where there’s no accountability.”

But we live in a world where there’s no accountability. It’s called Illinois. Foxx called Lightfoot a liar, saying some statements Lightfoot made about the West Side case “simply weren’t true.”

“I was quite honestly mortified by what happened yesterday,” Foxx said, “particularly because the mayor, as a former prosecutor, knows that what she did yesterday was inappropriate.”

That’s rich, coming from Foxx, who forgets her star-obsessed role in her Jussie Smollett fiasco and so many other roles she’s played, like the one she played in not charging the attacker in the murder of a Chicago cabdriver.

The murdered cabdriver was Anis Tungekar. He died of blunt-force trauma to the head after a fight downtown in September of 2018. He wasn’t a celebrity like Smollett. He didn’t have important friends in politics or in Hollywood. He didn’t know Kamala Harris.

Tungekar was a hardworking cabdriver, an immigrant from Pakistan, a proud, law-abiding American citizen, a father. Tungekar was kicked in the back of the head as he walked away from a confrontation, kicked by an Uber driver, a flying kick delivered by someone trained in martial arts.

There was video of the Uber driver, Fangqi Lu, delivering the kick. There were witnesses. Lu allegedly attacked someone else a few weeks before. Lu didn’t have a valid driver’s license. Detectives feared Lu would flee back to China if he wasn’t charged and put into custody.

He wasn’t charged. He fled, presumably back to China. I suppose Mr. Tungekar didn’t count with Foxx. He wasn’t a star like Smollett.

There is no Republican Party here to challenge Foxx or her protector, Democrat boss Toni Preckwinkle. This is a Democratic city in a Democratic-run county in a Democratic state, with the Democrat Big Boy governor high up on his hill. Many who’d vote against them have already gone.