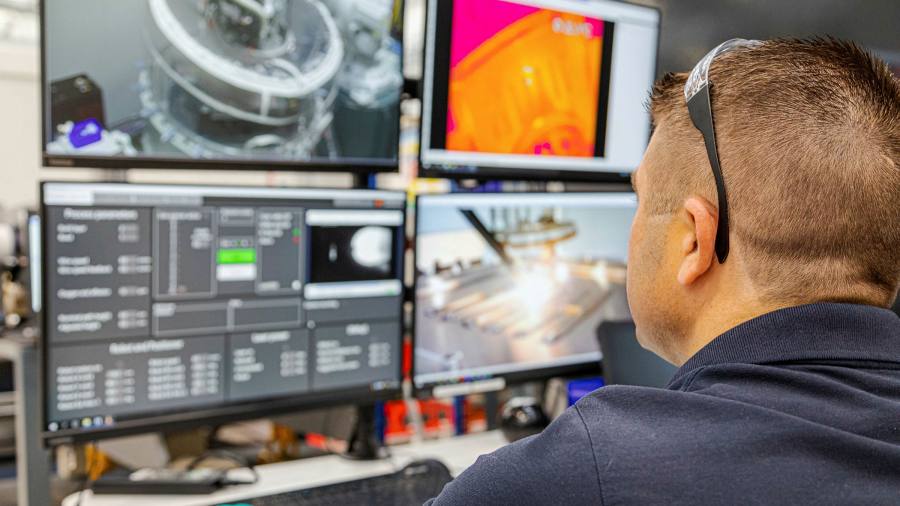 One of Britain’s most important attempts to cut carbon emissions from aviation is taking shape on the outskirts of Bristol — not on an airfield or in a laboratory, but inside a boxy new building that looks like an Ikea warehouse.

A short distance from where Concorde made its first British flights, engineers are experimenting with new types of materials including composites and increased automation to make them into wings and other aircraft structures.

Pride of place at one end of the factory goes to a blue-grey 17-metre long strip of multi-layered composite. It will be the backbone of one of three new prototypes for what Airbus, the European plane maker, calls its Wing of Tomorrow programme.

The new £32m technology centre is owned by GKN Aerospace, part of the FTSE 100 buyout specialist Melrose Industries. Funded jointly with the government, the centre’s primary focus is on decarbonising the industry — and on ensuring that the UK retains its leading role in wing technology, one of the most critical and lucrative parts of aircraft manufacture.

While some other sectors, such as automotive, have already taken significant steps towards net zero emission goals, the long lead times of building new aircraft have meant that change has been slower.

The manufacture of lighter, stronger wing structures is seen as one of the solutions, alongside the use of sustainable aviation fuels, battery power and hydrogen, to help the industry cut its emissions.

“This is about groundbreaking technology for the future of flight to make aircraft more sustainable . . . this centre here really does maintain the UK’s leadership in wing technology,” said Peter Dilnot, chief operating officer of Melrose.

The work on Airbus’s Wing of Tomorrow programme is partially funded by the Aerospace Technology Institute (ATI), which allocates state funding for innovation in the sector.

Future funding, including from the government through the ATI, was critical for the UK to retain its leading position on wing manufacture, said Dilnot. “We still have a strong position but it requires continued funding — you can’t turn the tap on and off on this sort of stuff — for us to sustain that position,” he added.

At the technology centre, GKN and more than 20 partners are working on a number of different projects, including a hydrogen propulsion system for small aircraft and wings for an all-electric plane.

One of the main challenges in the design of new wings is to make production more efficient. Chris Everett, senior vice-president at GKN Aerospace, said new processes had enabled the company to reduce waste by 25 per cent and cut energy consumption by 80 per cent compared with traditional composite manufacturing today.

Another notable difference is that, unlike previous wing spars, the three prototypes that GKN is building for the Wing of Tomorrow programme are single pieces, rather than a number of sections put together. Each piece is made up of more than 30 layers of composite. The technical challenge for the industry, said Dilnot, will be to increase the speed of that layering process.

While Airbus insists that the Wing of Tomorrow is focused on testing technologies and composites without a specific new aircraft in mind, analysts believe a new lightweight wing could be deployed on an updated version of the company’s bestselling A320 planes.

Such a move could give the European manufacturer a new, more efficient aircraft, to take on arch-rival Boeing if the latter does go ahead with a new midsized jet.

“One of the potential applications of the Wing of Tomorrow has been recognised for several years as being a next derivative of the A320neo family,” said Sash Tusa, analyst at Agency Partners.

“A stretch of the A321neo . . . could be an immediate response to any Boeing mid-market programme,” he added. While it would not be as good as an all-new aircraft, development would be “at least three years faster”.

While the Bristol centre represents the future for GKN’s aerospace business, the immediate focus for the company is on improving the core business as the aviation industry recovers from the pandemic. Dilnot said he expected the civil aviation industry as a whole to get back to 80 per cent to 90 per cent of 2019 levels by 2024.

Acquired by Melrose in an £8bn hostile takeover in 2018, GKN’s operations span the aerospace as well as automotive and powder metallurgy sectors. Melrose, whose strategy is to buy, improve and sell, is in the process of restructuring all three divisions.

The company warned earlier this month that supply chain problems and the global chip shortage were hurting trading in its automotive and powder metallurgy businesses.

Once the restructuring is complete, future plans for GKN aerospace could include acquisitions, said Dilnot.

“Our primary focus is to improve the core business as it is, particularly as civil aerospace recovers. That said, we like aerospace and our business is about improving assets. We see lots of opportunity . . . for us to improve businesses consistent with our model,” he said.

Video: Will zero emissions aviation ever take off?

Yellen expects inflation to linger, then ease later in 2022