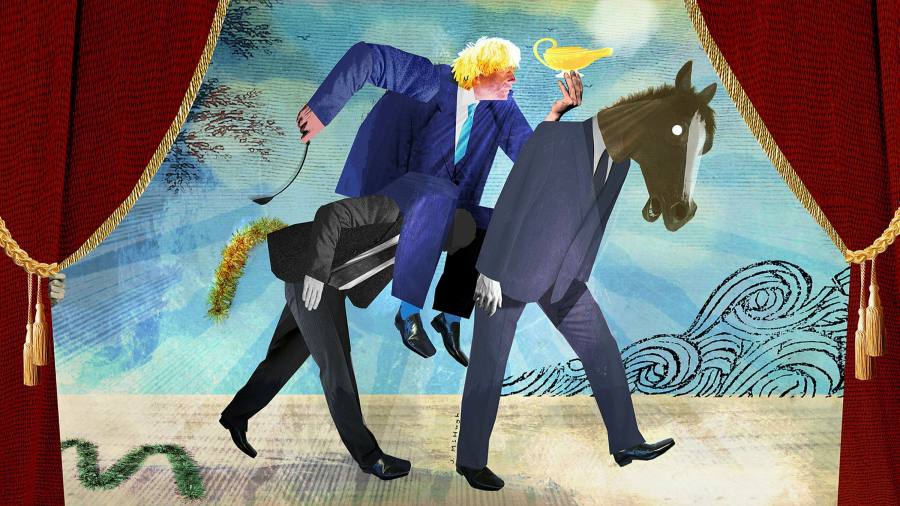 Johnson is caught up in a pantomime of personal evasions

Don’t go to work, but do go to parties. That’s the astonishing advice from our prime minister, whose sudden decision to trigger the government’s Covid Plan B feels like the equivalent of a man shouting “look over there!” while he tries to put his trousers back on.

It is pantomime season, after all, and Boris Johnson is keen to distract from last year’s Downing Street Christmas party, and other cover-ups which are coming home to roost. The prime minister’s two scientific advisers should receive medals for maintaining their poker faces, announcing new restrictions in the briefing room where Allegra Stratton, the former press adviser, was filmed trying to work out what on earth to say if asked about the party which Johnson still says never took place.

Stratton’s rapid, tearful resignation was in stark contrast to the reluctance of some male members of this government — Williamson, Hancock, Jenrick — to leave office. And they were actually in charge of something.

As the self-inflicted injuries pile up, the insult to our intelligence is overwhelming. It’s obvious there was a party — as many as seven, according to some reports — at a time when the government had criminalised mingling. To insist that “the guidelines were followed” is a cruel joke at the expense of all those who endured real hardship during strict lockdowns. Polls suggest that voters no longer trust the government to handle the pandemic. It has lost public trust, not over an issue of principle or ideology, but simply by an arrogant disregard for facts and rules.

“Boys will be boys” people would sometimes chuckle when my sons were small. I remember my four-year-old shouting “it wasn’t me!” after we’d watched him throw his elder brother’s toy down the drain. Conservative MPs used to say “Boris will be Boris” with the same forgiving smiles. Now, they need to take responsibility for what they have foisted upon the nation. Having kept him out of office for years, because they didn’t trust or respect him, they should have known better. Now, some are wondering whether they even overstated his electoral magic touch.

We are not yet at a resigning moment. As one seasoned Tory MP reminded me this week, “assassinations take time”. But Johnson’s cavalier attitude and disdain for detail has infected everything. Ministers and MPs are tired of having to cover up for their leader’s misjudgments. Officials are ground down by the chaos, implementing policies made on a whim, with routine decisions delayed. It’s not just the public who are becoming more cynical: so is Whitehall.

Only this, I think, can explain the appalling revelations about Britain’s failure to get more Afghans out of Kabul this summer, in a botched evacuation which left many to the mercy of the Taliban. Reading the 40-page testimony by Raphael Marshall, a former diplomat, conjures up the indifference which now haunts the corridors of power. It is a tale of empty offices, of thousands of emails backing up from desperate Afghans, of lone souls heroically trying to save citizens as others stuck to rigid working hours. One Saturday as Afghanistan’s capital was falling, the 25-year-old Marshall was the only person manning the evacuation desk, making life or death decisions without clear criteria.

He was operating in a vacuum. Dominic Raab, then foreign secretary, has denied reports that he came back from holiday two days after he was asked to, but his top civil servant has admitted not returning for 11 entire days after Kabul fell. At a hearing almost as cringeworthy as the Downing Street wallpaper saga, Sir Philip Barton claimed that coming back from holiday earlier wouldn’t have made much difference to the number of people evacuated. If that’s true, why is he in the job? What official, prime minister or foreign secretary wouldn’t want to rush to such a historic crisis? What animates these people?

There was, no doubt, fury with the Biden administration at the precipitous pullout. But a different leader would have rolled up their sleeves to help everyone they could. The main thing animating the prime minister, it seems, was dodging accountability. One of Marshall’s most devastating claims is that some emails were marked with a flag, so that it could be claimed they had all been read when they had not. Another is that the evacuation of cats and dogs by the maverick animal activist Pen Farthing limited the number of human beings who could be rescued because of the limited number of soldiers available to escort them to the airport. Number 10 has always denied any prime ministerial involvement in the animal rescue. This week, when Johnson’s parliamentary aide Trudy Harrison was shown to have given written permission for the animal evacuation, Downing Street tried to brush it off as “constituency business”. But Farthing is not one of Harrison’s constituents.

They take us for fools. And they can’t stop. Raab has tried to dismiss Marshall as a “junior desk officer” — although he has not denied Marshall’s claim that only 5 per cent of those at risk from the Taliban got out. Now he is — conveniently — isolating, having been in contact with the Australian deputy prime minister who contracted Covid. No minister wants to defend Mr Johnson on the airwaves.

“Please play your part” the prime minister pleaded to the nation, announcing the new Covid restrictions. Perhaps he could start by playing his part — which was supposed to be that of prime minister. His refrain, for now, is “It’s my party and I’ll lie if I want to”. But the audience is shouting: “Look behind you!”