Boris Johnson vowed on Monday that the UK will “never allow those who commit acts of evil to triumph” over parliamentary democracy as he led tributes in the House of Commons to Conservative MP Sir David Amess.

The prime minister opened an emotional afternoon session dedicated to Amess, who was killed in his Essex constituency on Friday after serving in parliament for 38 years.

Johnson praised his dedication to the Southend West constituency he represented since 1997, as he announced that the Queen would grant Southend-on-Sea city status, honouring a lengthy campaign by Amess.

Johnson said Amess, who was stabbed in a Methodist church in Leigh-on-Sea, was killed in a “contemptible act of violence” that struck at “the core of what it is to be a member of this House and violating the sanctity both of the church in which he was killed and the constituency surgery that is so essential to our representative democracy”.

Downing Street said Johnson believed the democratic process should not be disrupted by threats or violence. “The PM’s view is that we can’t be cowed by those who seek to divide us and spread hate,” it said.

Sir Keir Starmer, leader of the opposition Labour party, and scores of other MPs echoed his words — saying that Amess was a committed MP and champion of honourable politics.

“Let us use the memory of Sir David’s life and passions to . . . recommit ourselves in standing for the things that he stood for, the things the extremists will never comprehend — for decency in our disagreements, for kindness in our hearts,” Starmer said.

Patel told the Commons there was a “great deal of work taking place” with Hoyle and police forces on improving security and there would be further updates over the next few days.

Additional measures for MPs, such as police protection, pre-arranged constituency meetings and airport-style detectors, could be introduced, the home secretary has indicated.

The suspect in Amess’ killing is 25-year-old Ali Harbi Ali, a British national of Somali origin. He is being detained under the Terrorism Act, and detectives have a warrant to hold him for questioning until Friday.

While Ali was never a subject of interest to UK intelligence officers, he was referred during his school years to the Home Office’s Prevent deradicalisation programme, which provides support and mentoring to those thought to be at risk of extremism.

Ali’s involvement in the programme — which relies on voluntary participation — was brief, according to one person familiar with the investigation. Nevertheless, his referral is likely to intensify concerns about the effectiveness of Prevent, which is being examined under an independent review. 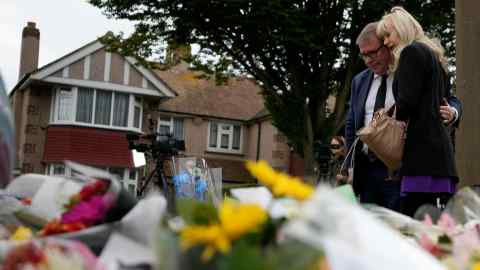 Patel did not comment on the investigation, but noted the issue of “lone wolf” attackers was not new. “We will continue to discuss work across intelligence, policing and security — prisons and probation as well — the work that takes place to prevent these attacks.”

Many MPs accept that further safety measures will now be necessary. But Stephen Timms, a Labour MP who was stabbed at a constituency surgery in 2010, warned that security should not be overwhelming.

“We must not give up on the accessibility of MPs. If we do, the sponsors of those who attacked David and who attacked me will have succeeded. That must not happen,” he said.

One female Labour MP said many colleagues would “carry on as we always have” due to a lack of alternatives. “Unless I get permanent security I don’t see how we can get around the obvious vulnerabilities beyond what we already have in place.”

An influential minister added, “I haven’t done a surgery in years, it’s just not a good or safe idea. I can’t imagine much will change, just as it didn’t after Jo Cox [who was killed in her constituency in 2016].”

Conservative MP Matt Warman warned that Amess’ killing would have “a chilling effect on the nature of politics”. He said the abuse of MPs would “deter the next generation of young people from going into politics and make it harder to attract a pool of talent into Westminster”.

FBI, US embassy working to obtain release of 17 people, including Americans, kidnapped in Haiti