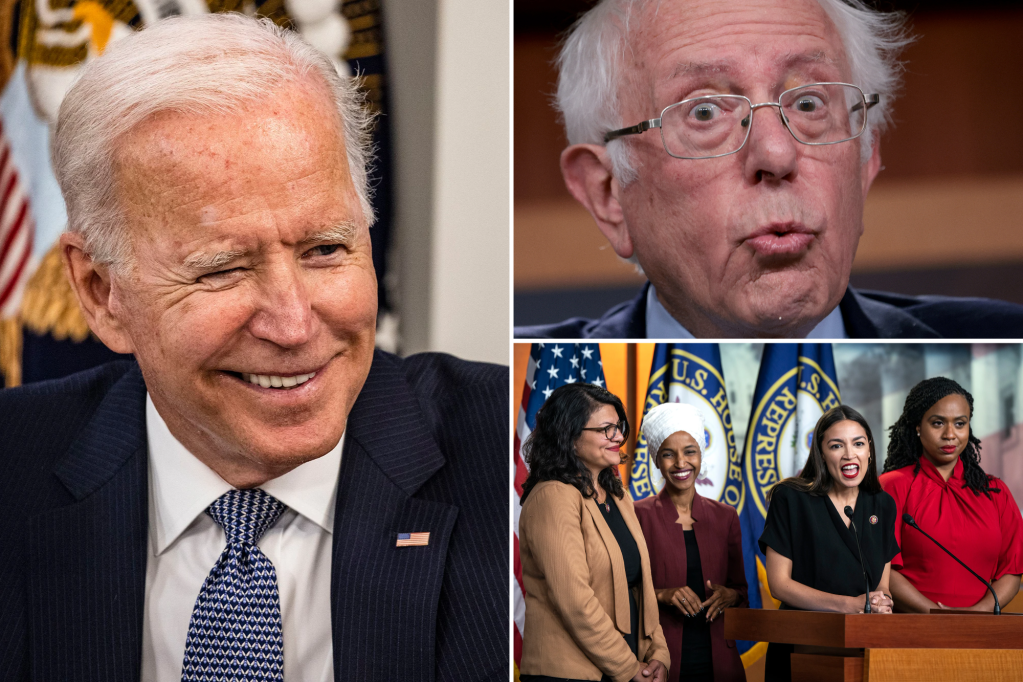 When Democratic primary voters coalesced behind the candidacy of Joe Biden in 2020, their motive was clear. They embraced him to stop the hard left — led by a surging Sen. Bernie Sanders — from capturing control of their party. They knew that if they wanted to defeat President Donald Trump, they had to provide an alternative who was not an avowed socialist.

In the campaign that followed, Biden made policy proposals aimed at keeping his party’s left wing happy to avoid having Sanders supporters sit out the general election. But the Democrats’ overall pitch was to claim that he was a traditional moderate who would steer the country back toward the middle.

That was hard to challenge since he went into hiding during the pandemic and the mainstream press and social-media oligarchs never tested him on it.

Even after the election, Biden adopted the rhetoric of national unity, and his apologists asserted that his administration would reverse the polarization of American politics fueled by Trump. Yet the assumption that Biden would be the leader of his party’s moderate faction and keep the left in line turns out to have been badly mistaken.

As we saw last week, when confronted with the split in his party between moderates and progressives over whether to push through a $1 trillion compromise infrastructure bill backed by some Republicans and, later, lobby for his $3.5 trillion Build Back Better plan, the president left no doubt which side he was on: Though House Speaker Nancy Pelosi had promised the moderates in her caucus a vote on the smaller bill (reversing an earlier pledge to far-left progressives), Biden opposed that idea, and she backed down. The prez was all in with the House’s 100-member “Progressive Caucus.”

This faction is already unhappy that the laundry list of left-wing ideas in Biden’s Build Back Better scheme was cut down from the original $6 trillion price tag. The left is equally dismayed that centrist Democrats in the Senate, particularly Joe Manchin and Kyrsten Sinema, are insisting it be further reduced. It’s not just a collection of leftist loud mouths (most prominently, “Squad” regulars like Reps. Alexandria Ocasio-Cortez and Ilhan Omar); it now has the full backing of the White House.

The issue here is more than just the irresponsible spending and tax increases Democrats are trying to foist on the country. Or their assertion that the cost will be zero, a bogus claim that goes beyond chutzpah to outright gaslighting.

Nor is it solely the fact that their program — which involves a vast expansion of government power and entitlements — is being done in the name of rebuilding our crumbling infrastructure, when in fact even the cheaper $1 trillion package is packed with items that have little to do with infrastructure.

Rather, it’s that the independent voters who provided Biden‘s margin of victory — as well as the moderate Democrats whose wins in purple districts gave their party control of the House — were had. (The same goes for any Senate Republicans who voted for the $1 trillion spending plan on the assumption that they were bolstering bipartisanship.)

Fact is, the Democratic Party that now controls the White House and both houses of Congress may have many genuine moderates in it, but the people who are really calling the shots are not remotely centrists nor even traditional liberals, like Pelosi once was.

No, Bernie Sanders and the Squad were the real winners of the 2020 election because their radical ideas — which, unlike Biden, they are honest enough to label as democratic socialism — are the ones driving this administration’s agenda. It was Bernie himself who wrote the $3.5 trillion spending plan.

The stakes couldn’t be higher. Manchin (who just upped his top line from $1.5 trillion to $2.2 trillion) and Sinema (and moderate Senate Republicans) need to stop pretending that being co-opted by the left is an acceptable compromise. They need to stand their ground.

Stop avoiding the fact that the Democrats have been captured by an extremist faction whose goals have little to do with repairing bridges or tunnels and everything to do with remaking America along socialist lines.