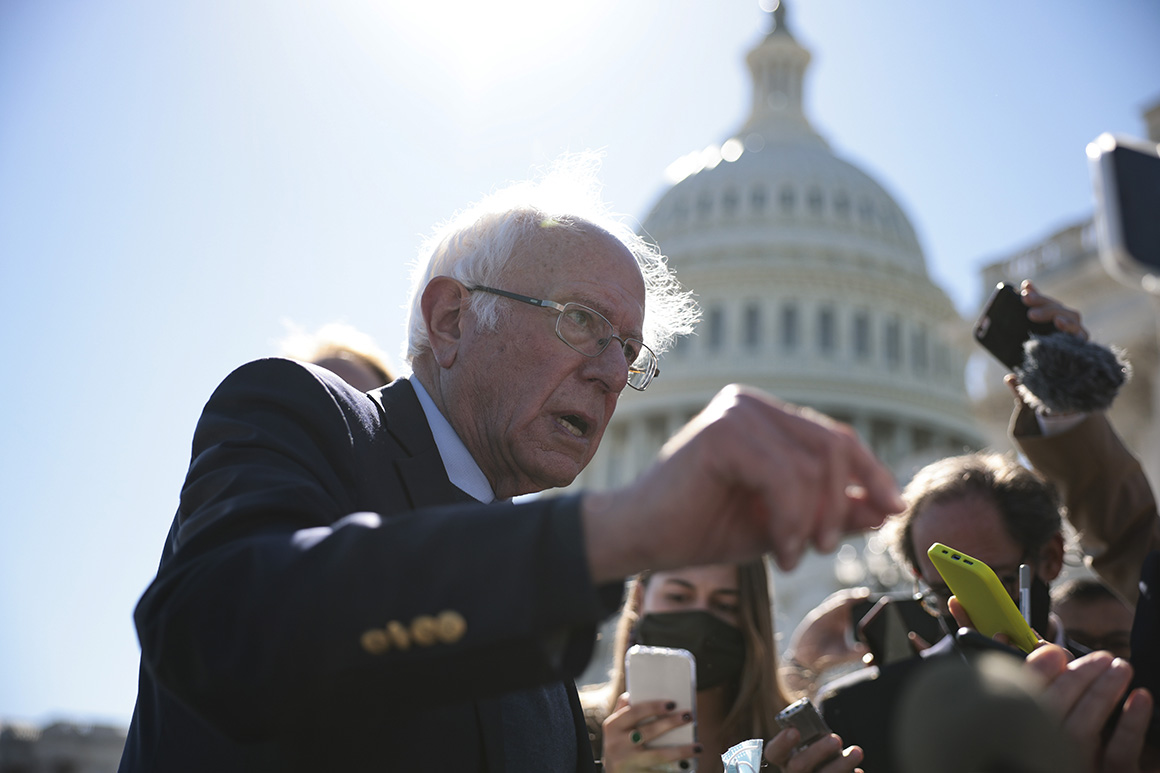 Manchin has repeatedly raised doubts about expanding government programs like Medicare and paid leave while boxing in Democrats with an insistence on a $1.5 trillion price tag. The party hopes Manchin can come up to $1.75 trillion to save some programs. He and Sinema met with Biden on Tuesday evening and with White House officials for two hours on Wednesday morning.

After those meetings, Manchin indicated it was time for his colleagues to weigh in on where things stand.

“Everybody is working in such good faith. The president’s been wonderful,” Manchin said as progressive Sen. Elizabeth Warren (D-Mass.) yanked him into an elevator on Wednesday afternoon. “There’s 50 of us.”

Several Democrats said a deal was essentially done, pending Biden and Sanders’ final sign off. But the exclusion of paid leave prompted protests from Sens. Kirsten Gillibrand (D-N.Y.) and Patty Murray (D-Wash.), who told reporters she’s “not going to let one or two men tell millions of people in this country that they can’t have paid leave.”

That consternation lowered expectations for President Biden to make his case directly to House Democrats before leaving the country. Instead, the caucus will meet at 9 a.m. in a closed-door meeting to regroup.

“My hope would be tomorrow,” House Majority Leader Steny Hoyer said of an infrastructure vote. “The speaker and I both believe we need to get this bill done, and that’s why we’re working so hard to get a framework.”

The sudden urgency could be crucial to moving the bipartisan infrastructure bill to Biden’s desk before next week’s New Jersey and Virginia gubernatorial elections. Yet it will also require buy-in from skeptical progressives, who are seeing their priorities increasingly shrunk or left behind. And time is starting to run short.

Even if a framework is released in short order, House Democrats do not yet have the votes for infrastructure this week. Leaders of the Congressional Progressive Caucus warned Wednesday that roughly “three dozen” of their members have demanded more than simply Biden announcing a deal.

Privately, though, some Democrats said the number of hard “no” members was closer to one dozen. Those could be offset by moderate Republican votes, but still represent a problem for House leadership.

“The president has made that very clear: He wants to move forward. And we owe it to the president to move forward, take a vote on the infrastructure bill,” Manchin told reporters on Wednesday morning. “He believes 100 percent of nothing is nothing.”

White House press secretary Jen Psaki said that there could be some flexibility on what time on Thursday the president leaves for Europe, but that it should not be expected that he would delay his trip to meet with House Democrats.

Manchin explained that when a deal is cut, Biden will “go over to the House, and he’ll basically explain to the House: ‘I have a framework, but there’s still an awful lot of work to be done,’” Manchin said.

Speaker Nancy Pelosi told House Democrats on Wednesday morning that her party is “in pretty good shape.” Even so, Pelosi continues to face an intense push-pull from liberals — who want to see a full social spending bill before voting on the Senate’s bipartisan infrastructure deal — and moderates who want to get the infrastructure vote finally set, as soon as possible.

“It’s lamb eat lamb. There is no bad decision. We have to choose,” Pelosi told her members, according to a source familiar with her remarks. Senate Democrats say it’s highly unlikely bill text will be totally finalized this week, however.

Progressives have also blanched at Sinema’s efforts to avoid raising tax rates and Manchin’s move to cut the bill’s top line. Those moves have prompted a deal on a corporate minimum tax and tenuous negotiations on a billionaires tax, as well as potential cuts to plans for Medicare expansion, Medicaid expansion and paid leave. Efforts to lower drug prices through Medicare negotiations are headed toward a more limited approach, Democrats said.

By midday Wednesday, the billionaire tax was out of the mix, according to multiple sources familiar with the talks. Manchin said the tax on billionaire’s assets is “convoluted” and instead pitched a “patriotic” 15 percent tax on wealthy people. He said he did not want to target a certain class of people through the tax code.

“I continue to be optimistic that on the spending side, there are pathways toward closing the remaining gaps,” said Sen. Chris Coons (D-Del.). “But I recognize that Sen. Manchin’s just made a comment that made some of the revenue side” more complex.

With the billionaires tax out, Democrats are now taking another look at a surtax on people making more than $5 million a year that the House Ways and Means Committee passed last month.

Manchin also continued to throw cold water on health care proposals, which Sanders said was not negotiable and “must” be in the bill. His colleague, Sen. Raphael Warnock (D-Ga.), said he’d spoken to Manchin and is “encouraged” that Democrats can find a way to cover Georgians and other Americans who live in states that have not expanded Medicaid but would otherwise be eligible.

Democrats are more confident about climate subsidies and universal pre-K making it into in the package, along with an extension of the Child Tax Credit. But it all comes down to where Manchin and Sinema fall — and whether the rest of the party’s thin majorities go along with Biden’s dealmaking. Chairmen of the Senate’s climate-related committees met again on Wednesday afternoon, according to Democratic sources.

Passing the $550 billion bipartisan infrastructure bill will require a furious whipping operation in the House, where many progressives are still demanding more than just a framework from Biden on the safety net plan. Some want to see a Senate vote on the bill, an implausible scenario. But senior Democrats privately hope they can win over enough liberals with a deal that would allow them to pass the bill.

In a private caucus meeting Wednesday, Pelosi insisted the two bills would not have to be voted on at the same time, despite calls from the left flank to do so.

“I don’t want to get any impression that there was any promise these two would go together. At least I wasn’t part of that,” Pelosi said, according to Democrats in the room.

Without action on infrastructure, both chambers would need to quickly clear a stopgap for federal highway programs, which expire on Oct. 31.

Bernie Becker and Caitlin Emma contributed to this report.