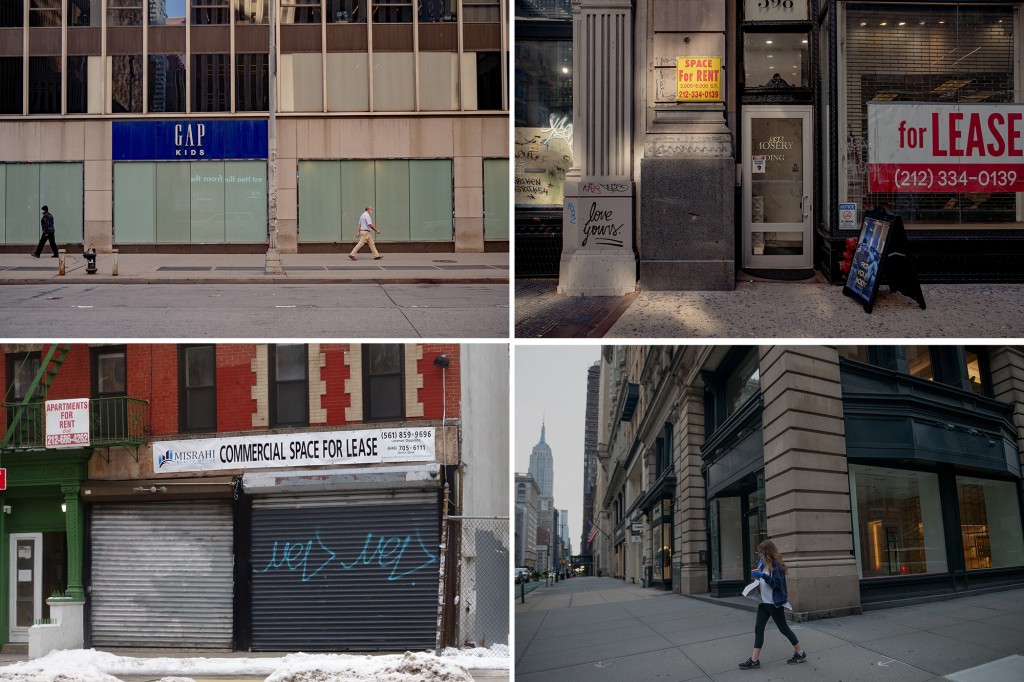 All those Midtown office workers sitting at home in their pajamas aren’t going on noontime shopping sprees, power lunches or after-work drinks — and it shows.

Midtown Manhattan is suffering worse than any other neighborhood in the city when it comes to vacant storefronts, according to a new real estate industry report.

Nearly 30 percent of storefronts in New York’s prime business district are empty. A “devastating” lack of office workers means there’s not enough customers to keep retailers up-and-running, according to the Real Estate Board of New York.

Those vacancies far outpace empty storefronts in more residential neighborhoods where there’s still a critical mass of people retailers and restaurants count on.

In Midtown, according to the REBNY report, only about 25 percent to 30 percent of the normal number of workers are coming into the office — meaning about 60,000 people on the streets for lunches, haircuts, shopping or shoeshines. That compares to 180,000 office workers in the area before the pandemic lockdowns.

Such a dearth of people has led to the spike in storefront vacancies — even on key corners and on ritzy Madison Avenue, according to the REBNY report. Some entire blocks are full of empty storefronts, which include retailers and restaurants alike.

Schnipper’s, a burger and sandwich joint, had three Manhattan locations before the pandemic. It has just two left as its bread-and-butter lunchtime crowds have been decimated.

The remaining Schnipper’s locations are both in Midtown — at Lexington Avenue and 51 Street and just off 41st Street and 8th Avenue. Co-owner Andrew Schipper said the stores are bringing in between 40 and 50 percent of their pre-March 2020 sales.

“We rely on office workers and they just haven’t come back yet,” he said.

And it’s not just Midtown: The restaurateur was forced to close his third eatery at 120 Church St. in Lower Manhattan in April 2020 after his landlord refused to give concessions on when the city went into lockdown, Schipper said. That space is still unoccupied. “It looks exactly like we left it 18 months ago.”

Schnipper said his Midtown landlords did work with him. That’s why those locations are still open, he said, declining to give details on the concessions.

Those figures jibe with other statistics that show small businesses and retailers, including restaurants and bars, have been among the hardest-hit in the Big Apple, as The Post has reported.

“REBNY’s findings confirm the crippling effect that the pandemic has had – and continues to have – on the retail sector in Midtown Manhattan,” Fred Cerullo, president and CEO of the Grand Central Partnership, said in a statement. “For these businesses to thrive, they need the kind of foot traffic generated by tourists and office workers.”

Labor Day was supposed to kick off the return to offices, but the Delta variant pushed back many companies’ plans to bring back employees.

About two-thirds of companies delayed their returns to the office to as far back as early 2022, according to a Gartner study in August, while a recent report from The Partnership for New York found that city employers had expected only 41 percent of office workers to have returned by Sept. 30 — down from a previous estimate of 60 percent.

The retail sector in some residential neighborhoods in the outer boroughs, meanwhile, have fared much better than those in Manhattan, the report said. The retail vacancy rate in Greenpoint and Prospect Heights in Brooklyn was 14.6 percent; it was 14 percent in Astoria and Sunnyside in Queens.

But retail corridors that depend on office commuters have lagged behind those in residential neighborhoods. Subway ridership as of September has has risen to only 50 percent of pre-pandemic levels, the report notes. And Manhattan accounts for nearly half of the city’s jobs in the retail sector.

All of those businesses are big business for New York: The retail sector in 2019 provided 344,600 jobs and contributed $55 billion in taxable sales to the city’s economy, according to the report.

To counter the negative trends, REBNY, which represents the city’s largest real estate interests, recommended the city and state focus on aggressive vaccination policies and encourage employers to bring workers back to the office.

“New York City is still reeling,” the report said. “Restoring the city’s economy will not be complete without the retail sector.”