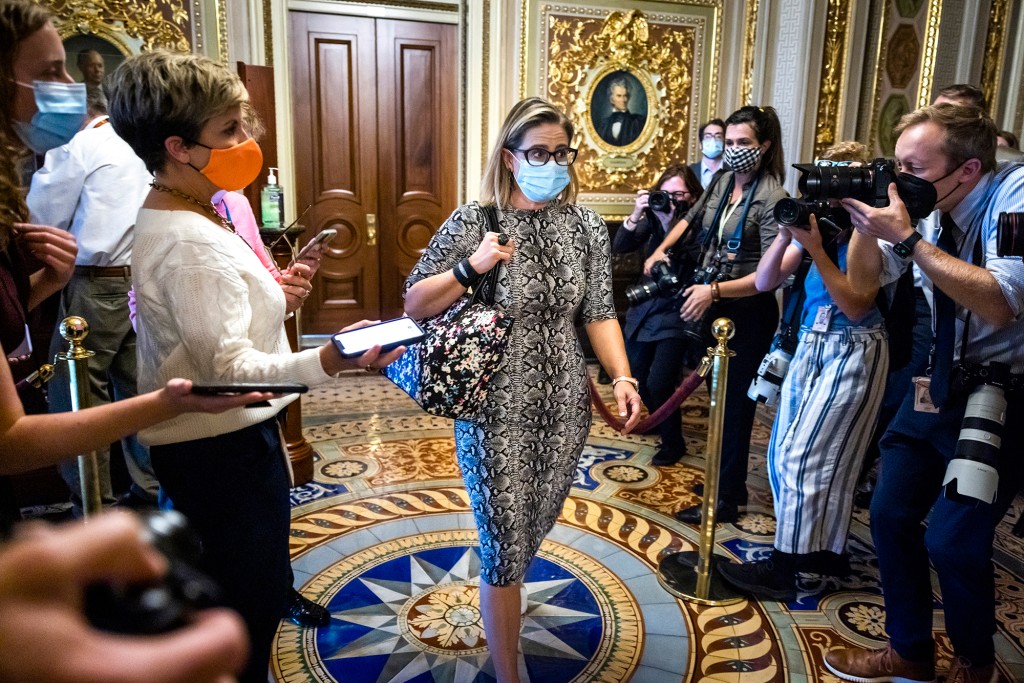 Moderate Democrats all but extinct: Goodwin

The Wall Street Journal wrote Tuesday that President Biden was making another attempt to salvage his stalled legislative agenda by meeting separately with progressive and moderate Democrats.

The next sentence was more telling: The moderates were Sens. Kyrsten Sinema (D-Ariz.) and Joe Manchin (D-W.Va.). The progressives were too numerous to mention.

If you get the impression there are only two senators holding back the great flood of government waste known variously as “Build Back Better and the “human-infrastructure” package, you’ve got the whole story — as told by the Washington press corps.

For my money, the much more interesting angle, and far more important to the future of America, is what’s going on with the other 48 Senate Dems. All apparently are on board with the most expensive piece of legislation in history and are happy to be called progressives.

The legislation in question was crafted by Sen. Bernie Sanders, and he says the current price of $3.5 trillion is “the minimum” and “already a compromise.” Much of the bill remains a secret and some parts are still being written.

Yet the 48 already have said yes. Talk about a blank check.

The math can mean only one thing: the Dems’ civil war is over, with just minor mopping-up operations remaining. The moderates, both of them, are the endangered remnants of a defeated force.

Until he started calling the whole country racist, Joe Biden said he was a moderate, and Chuck Schumer, too. New York’s other senator, Kirsten Gillibrand, was so moderate, she was deemed too conservative for the state when she was appointed to fill Hillary Clinton’s old seat. Now she’s a proud progressive who makes news only when she says something especially dumb or outlandish.

The pattern is the same across the nation. Dick Durbin of Illinois, Tim Kaine of Virginia, Michael Bennet of Colorado and Chris Coons of Delaware were all center-left Senate Democrats. Cory Booker was a tough-on-crime mayor of Newark before he joined them and jumped off the cliff.

Either they all had spiritual awakenings or, like human weather vanes, saw which way the wind was blowing and joined the winning side. I’m partial to the weather-vane explanation.

Presumably all these former moderates are fine with the vicious attacks on the two holdouts, who hold positions they all held for years. There’s no precedent to the Sanders bill because it never would have seen the light of day in any other era.

Yet there is only silence from the 48 as the attacks increasingly aim at bludgeoning Manchin and Sinema into surrender instead of winning them over. Recall that when Sinema was harassed in a public restroom by a far-lefter, Biden called it “part of the process.”

Which process is that?

The attacks also include growing predictions and demands that Manchin or Sinema, or both, leave the party and become independents or Republicans.

How did this happen? When did so many Democrats lose their common sense and embrace the insane policies and tactics of the far left?

Not so many Sulzbergers ago, The New York Times would have asked and tried to answer those seminal questions. After all, when one of the nation’s two main political parties changes its stripes in such dramatic fashion, that’s what used to be called a helluva story. It reflects culture as well as politics.

No more. Now the Times is the enforcer of progressive orthodoxy and has been scorching Manchin and Sinema on its front page, demanding they stop resisting and get with the Biden-Sanders program.

That’s what happens when a newspaper stops being a newspaper and becomes a radical activist.

In recent weeks, the paper dispatched reporters to West Virginia and Arizona to find people who aren’t happy with the holdouts.

A late September Page 1 hit job called Sinema “stubbornly centrist” and opened with three paragraphs about how a former supporter turned against her.

“It really feels like she does not care about her voters,” the paper quoted the former supporter as saying. “I will never vote for her again.”

What that voter really represents is the Times’ opinion. That’s not news. It’s propaganda.

A Monday piece by the paper’s fashion critic about how the senator dresses was headlined “Decoding Kyrsten Sinema’s Style.” It called her an “obstructionist” for objecting to the $3.5 trillion bill. At the Times, even fashion critics are free to voice their political ­opinions.

Because Sinema is a bisexual woman, I tried to imagine how the Gray Lady would have exploded if a conservative publication had run the same piece about Sinema’s clothes and linked them to her ­policies.

Manchin is also getting rough treatment, though his fashion choices haven’t been critiqued. His sin is his objection to a $150 billion provision of the Sanders’ bill incentivizing clean electricity, a decision that was the top story in Saturday’s Times.

Monday’s follow-up went for the knockout, with another front-page headline on the same subject. This one screamed “Blocking Climate Plan with Hometown at Risk” as the subhead added, “Manchin Protects Coal Economy as Floods Swamp His State.”

So Manchin is a traitor to his state for not supporting a bill to end the coal industry and hobble all fossil-fuel production. Two facts: Those industries are top job producers in West Virginia, and the people of the state elected Manchin.

But democracy is worth saving only when it delivers the results the left demands. And dissent is patriotic only when the Times approves.

She writes: “Suburban schools don’t eliminate those programs because that would enrage parents. They simply make admission open to all. Some suburban districts enroll their entire eighth grade classes in ninth-grade math courses.

“Educators and parents endorse high standards out of concern that low standards would handicap students in college. However, except for some competitive math/science programs, college education consists of dumbed down political indoctrination. The sad, bizarre truth may be that our mayor’s idiotic attitude is the appropriate stance toward achieving what passes for success in our nation.”

No free ride for MTA

The MTA keeps blaming a contractor for the failure to open its new bus command center. The building sits unused 2¹/₂ years after construction was completed.

A top agency official told board members Monday the work of the Parsons Transportation Group had “lots of quality issues,” citing “defective” cable harnesses on thousands of buses.

Parsons denies the charge, but even if true, it also must be true that there was a failure of supervision and quality control by the MTA itself. Otherwise, how could such large and important issues go undetected for so long?