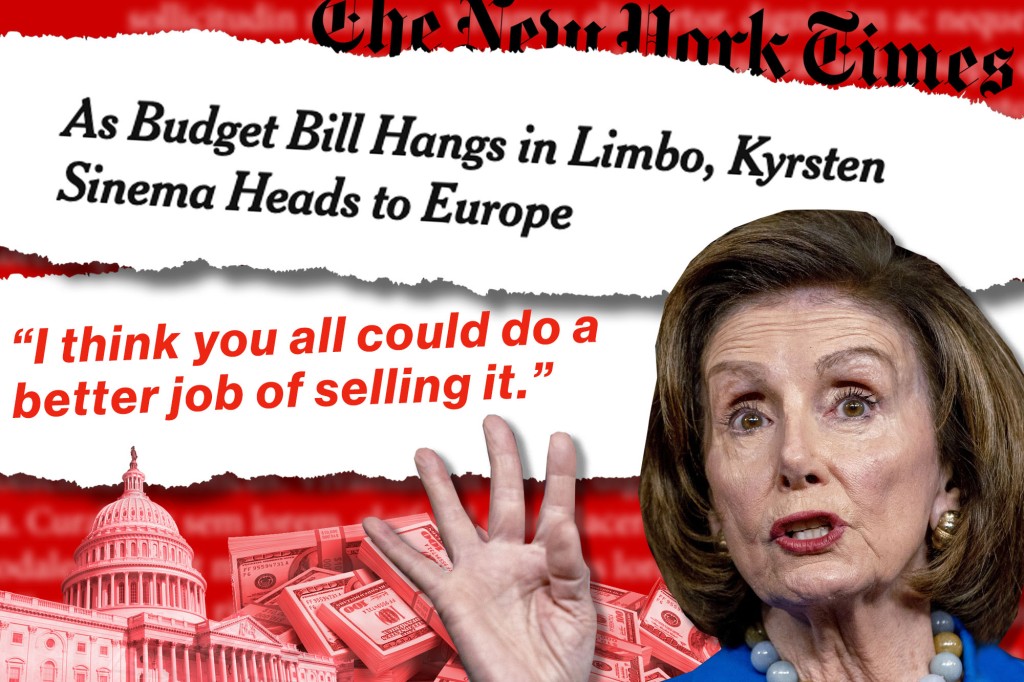 Nancy’s attack on the media, the NYT’s hit on Kyrsten Sinema

We say: That Washington Post headline Thursday paints Republicans as the bad guys in the supply-chain crisis, which has scores of ships — carrying 250,000 containers of merchandise — lined up waiting to be unloaded outside US ports, slowing deliveries and fueling inflation. As if President Biden bears no responsibility. Yet it was Biden and fellow Democrats who juiced up demand for new goods by injecting trillions into the economy. And at the same time they paid workers bonuses for not working. Nor did they act as the crisis built all year. And now they want to spend trillions more (much of it in borrowed money), further heating up demand. But, hey: The GOP has no right to “pounce.”

“I think you all could do a better job of selling it.”

We say: You can’t blame Pelosi for expecting the media to do the Democrats’ bidding — that’s what they always do (even if they claim they’re not partisan). Yet it’s no surprise that they’ve had a hard time hiding the spending bill’s monster price tag from the public, despite President Biden’s bald-face lie that the $3.5 trillion package would cost “zero dollars.” After all, Americans aren’t idiots; they know they’ll pay the full price in the end. So cut the media a break, Nancy. There’s a limit to what even they can do for Dems.

We say: What better proof that The New York Times isn’t above the absolute cheapest of shots than this nasty slam on Sen. Kyrsten Sinema: The paper’s blasting her for heading to Europe — raising funds apparently not for herself but Senate Democrats, while the Senate’s out of session and after she’s made her red lines crystal clear to the White House — merely because, unlike the Times, she believes President Biden’s $3.5 trillion spending bill is too expensive. Editors rather she remain in America, subject to vicious protests, like the one where a radical leftist filmed her as she went to the bathroom. Of course, the Times would never attack Biden for spending much of his presidency in Delaware. It’s beyond shameful.

We say: Business Insider seems to think its headline needs to apologize to liberal readers for a story about Biden family corruption in order to be acceptable. Of course, neither President Donald Trump nor Fox News have played any role whatsoever in Hunter Biden’s repeated attempts to sell influence by capitalizing on his dad’s positions as president and VP. Or in Joe Biden’s failure to even acknowledge that (let alone stop it). Yet in reporting about Hunter corruption, BI is begging readers, screaming: Hey, we’re liberal, too, and, like you, we also hate Trump — so please don’t set off a Twitter mob against us.