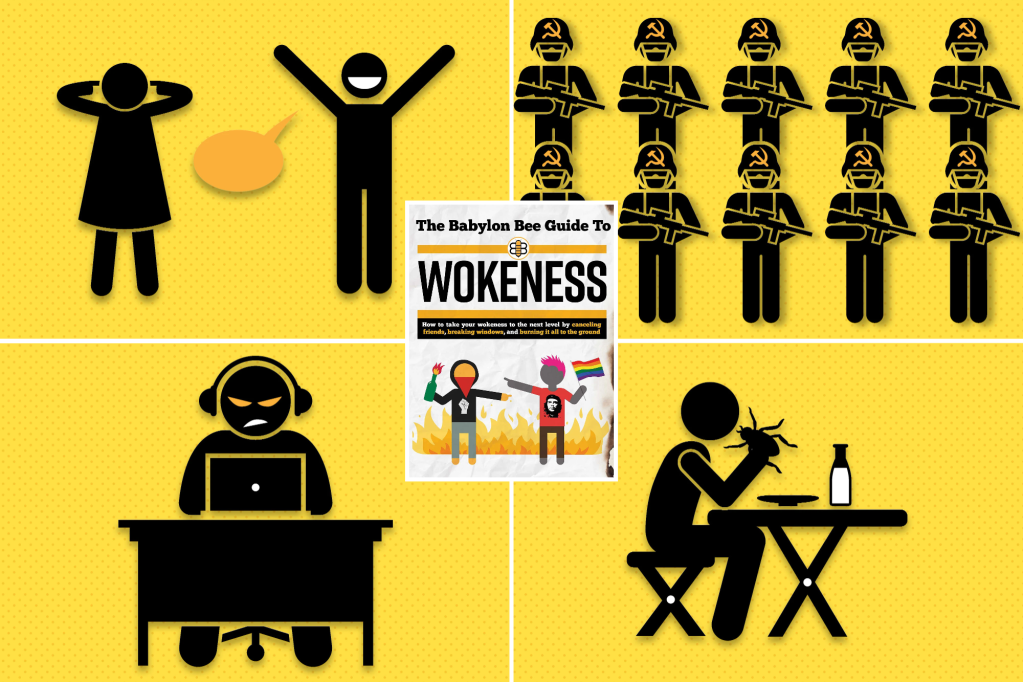 Our brave new progressive world, from A to Woke

in Opinion
Reading Time: 11 mins read
A A

In his woke instruction manual 1984, author George Orwell wrote about how important it is to control the dictionary. The one who controls the language controls the past, present, and future.

“Don’t you see that the whole aim of Newspeak is to narrow the range of thought? In the end we shall make thought-crime literally impossible, because there will be no words in which to express it,” Orwell wrote.

Thanks for the great idea, Mr. Orwell!

To that end, the staff of satire site The Babylon Bee has put together a glossary of all the words you’ll need to know if you want to sound smart while hanging out with your other woke friends.

You’ll find it in their new book, out next week, called “The Babylon Bee Guide to Wokeness.” But you, lucky progressive, get an exclusive first look:

Abolitionism — The noble movement to remove all police protection from urban communities and replace them with unarmed antiracist interpretive dancers.

Ally — A straight white male who kills himself.

Antiracism — The act of judging everyone by skin color in order to defeat racism.

Antifascism — The act of beating people senseless with bike locks to defeat fascism.

Canceling — The sacred ritual of shunning those who deny the doctrines of our righteous movement. Shun the nonbeliever!

Capitalism — A system in which people freely exchange goods and services. The evilest system that has ever been invented.

Cisgender — An unenlightened normie who identifies with their biological sex.

Cisgendered Hetero Patriarchonormative Whitemanspreading — What? No idea what this is. But it sounds terrible!

Climate Justice — The act of living in mud huts and eating bugs until the cancer of humanity is extinguished and Mother Gaia can live on. Also, any tax can be considered climate justice.

Communism — Basically, it’s loving people and sharing with them, just like the Care Bears taught. It’s the greatest system ever invented.

Critical Theory — The classification of all human interactions as some sort of power imbalance that must be remedied by dismantling systems of oppression until all meaningless sacks of meat and chemicals are the exact same and life is uninteresting, which will make it much easier for humans to just kill themselves, which is the ultimate goal here.

Cultural Relativism — The essential belief that all cultural ideas are equally valid and must never be compared to an objective moral standard. This belief must be held until the West is destroyed. Then we can stop believing it.

Deadname — When you erase a trans-body by referring to them by the name given to them at birth. This is basically the same as murder. If you do it by accident, it’s just manslaughter, though.

Do Better — Believe the same things as me or things will be really bad for you. This is a warning.

Dog Whistle — A top-secret racism signal that signals all the racists to do the racism. Thousands of racists are standing by waiting to hear the dog whistle before they activate. Aryans, assemble!

Empowerment — When someone does something the dominant culture considers really degrading, but all the good people say, “You go, girl!”

Equity — When everything is fixed and everyone is happy and all the problems go away. Just give us power, and we’ll give you equity!

Fascism — Anything that is not woke. Can be addressed with beating and shooting.

Fatphobia — The fear of big, beautiful cholesterol and diabetes.

Feminist — Someone who believes that men and women should be equal and men should also die.

Folx — The gender-neutral version of “folks,” which was already gender neutral to begin with. So it’s DOUBLE gender-neutral! Wait, does that cancel it out? We need to rethink this one.

Gender — How DARE you!

Genocide — Any time a marginalized person’s humanity is erased by someone not agreeing with them. Example: “Your refusal to validate my personal experience is literal genocide.”

Hate Speech — Any speech that you disagree with, no matter how slightly.

Heteronormativity — An oppressive environment induced by most people not being gay.

History — Systemic colonial-patriarchal propaganda that others BIPOC and minority gender-identity groups. Also, it’s boring and there are a lot of guns, which we don’t like.

Homophobe — Anyone who disagrees — no matter how slightly — with the LGBTQ community. Should be destroyed.

Institutional Racism — Racism is so powerful that it invisibly affects our institutions. Any time there is a disparity between different groups of people, that is always automatically proof of institutional racism.

Internalized Oppression — When a woman makes a sandwich for her husband.

Double Internalized Oppression — When a black woman makes a sandwich for her white Republican husband.

Justice — When injustice is done in service to a marginalized group.

Liberation — The ultimate goal of wokeness. Can only be achieved through a communist overthrow of Western capitalism. Yay!

Lived Experience — The final, ultimate and infallible source of all truth — as long as you are a member of an oppressed minority.

Male Tears — When you punch a stupid white male in the face and he cries due to his white male fragility.

Mansplaining — When a man ’splains something to a woman. This makes women feel bad for being so dumb. Not cool!

Manspreading — When a man sits with his knees apart instead of elegantly crossed like an elderly Jeff Goldblum. This act is no different than sexual assault.

Marxism — The greatest philosophy ever invented. Some say it has resulted in mass death and famine, but that’s only because true Marxism has never been tried.

Meritocracy — This is when people are allowed to rise and fall in a free society based on their talent and efforts. Meritocracy is racist because talent and effort are aspects of white culture and minorities shouldn’t be forced to live in such a system.

Microaggressions — Aggressions so small you need to be very alert and observant in order to see them. The proper response to them is a macroaggressive punch to the face.

Misogynist — Another word for “man.”

Narrative — The story we tell about reality, more real than reality itself. Surrender to the narrative!

Nazi — Someone who believes in liberty, free speech and small government, or anyone who dislikes Cardi B’s music.

Objectivity — The act of being impartial, which is an oppressive characteristic of white thinking and a racist dog whistle.

Oppression — The act of disagreeing with wokeness while refusing to die. Example: “Your very existence as a conservative white person is oppressing me.”

Patriarchy — An evil cabal of white men who got together and decided to have stronger muscles than women while making them have babies.

People of Color — Black and brown bodies who stand in solidarity with the struggle for communist revolution. These are special people who need the assistance of white liberals to survive.

Problematic — Whatever we don’t like today is problematic. This can change from day to day.

Queer — A gender identity you can pick when you’re not actually L, G, B or T, but still want to be one of the cool, marginalized kids.

Racism — A system of racism established by racists to protect racism, which means racism can mean whatever we want it to mean. And if you disagree, you’re a racist.

Rape — This used to mean forced sexual assault, but now it can mean doing anything remotely masculine, such as building a skyscraper, manspreading or disagreeing with a feminist.

Safe Space — A warm, moist, sheltered cocoon of safety where marginalized people can feel safe, kind of like a uterus.

SCIENCE — The grand, majestic deity that holds the world together, whose TRUTH is administered by a priesthood of infallible scientists, and whose precepts we will follow with the faith of a child. BLESSED BE THE NAME OF SCIENCE.

Segregation — The noble and anti-racist practice of segregating black and brown bodies from their white oppressors to create spaces where whiteness cannot encroach.

Shaming — An evil act where you try to make someone feel bad for something they did that was bad.

Tokenism — When you shove an LGBTQ+ or POC character into your Netflix show just to get points on social media. So, like, every Netflix show ever made.

Tolkienism — When you shove a 3,000-year-old elf into your Netflix show.

Trans — The bravest members of the LGBTQ community and the current favorites, until something cooler comes along.

Transracial Neurodivergent Kinkableism — No idea what this is, but it sounds really bad.

Truth — An ancient myth from way back in the year 2019. People used to think there were “facts” we could all agree on. But no longer.

Victim — You. Me. Everyone. Except white people.

Whiteness — The original sin, first exhibited by Adam and Eve in the Garden of Eden. When Eve took a bite of that fruit, that was whiteness manifesting itself.

White Fragility — If you call someone a racist and they go, “Hey, what? I’m not a racist!” that’s a clear example of white fragility.

Whitesplaining — When white people try to explain to you the appeal of ranch dressing, Starbucks and The Killers.

Woke — The good guys. One who has woken up to the plight of the oppressed and done something about it by posting virtue signals on Instagram. 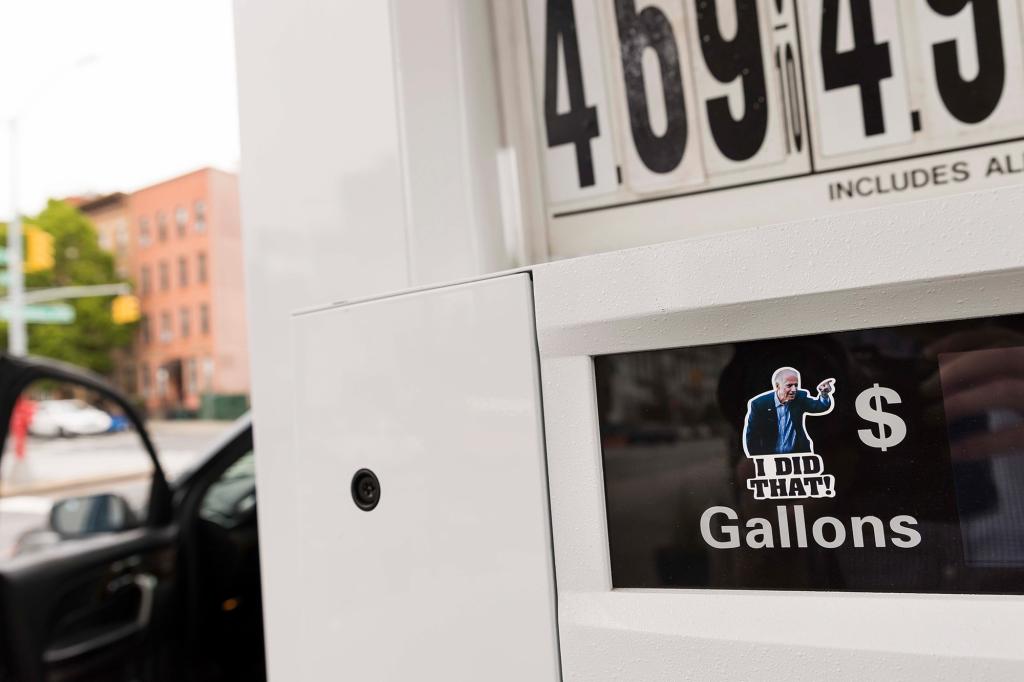 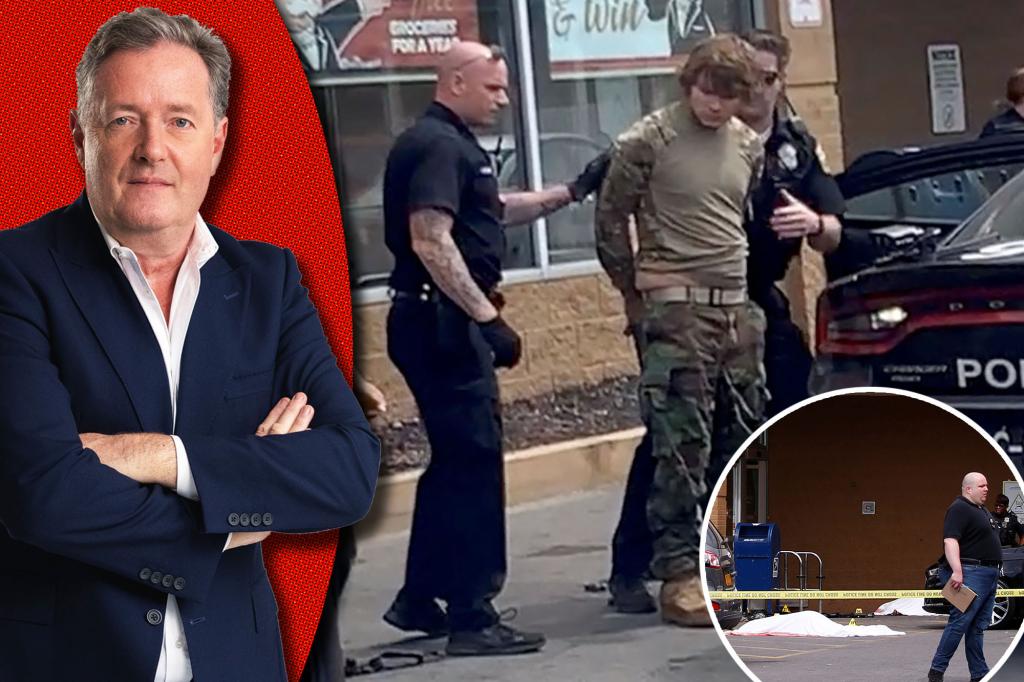 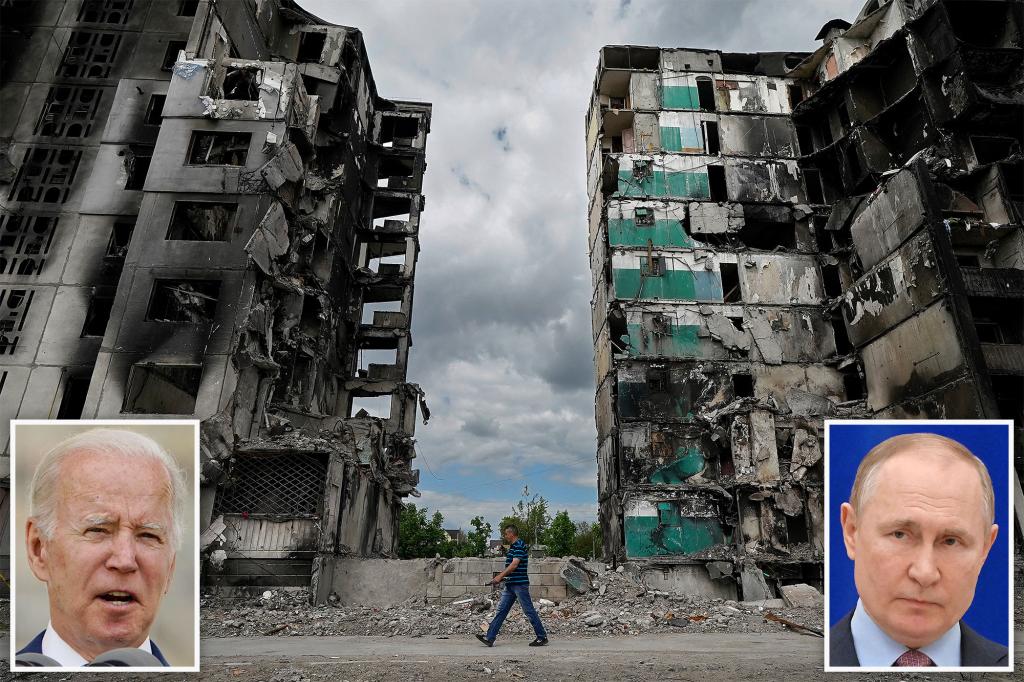 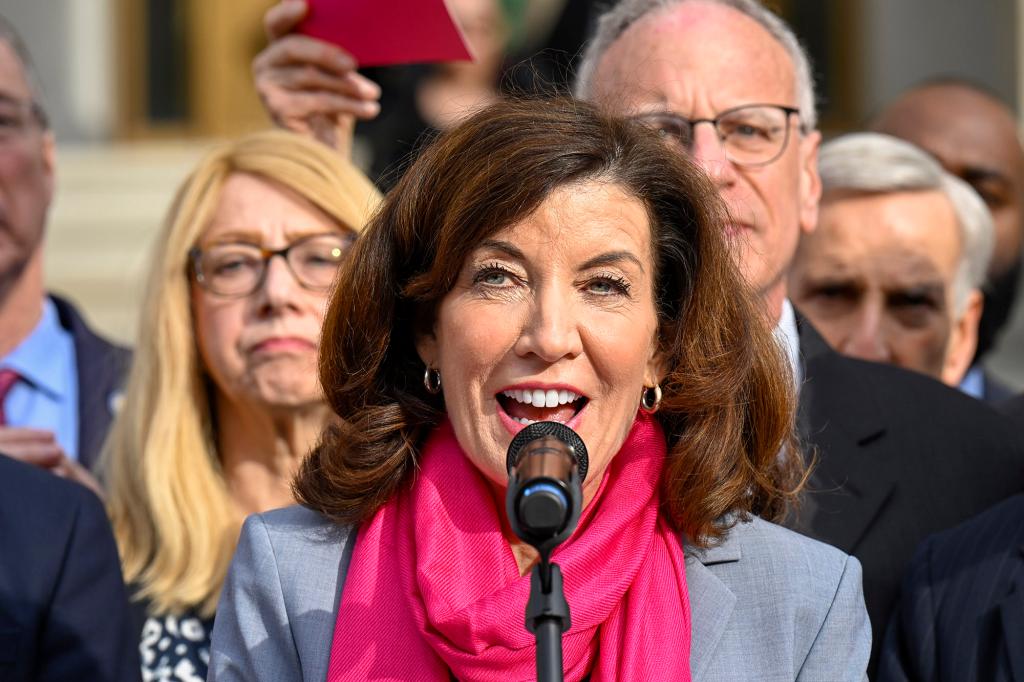 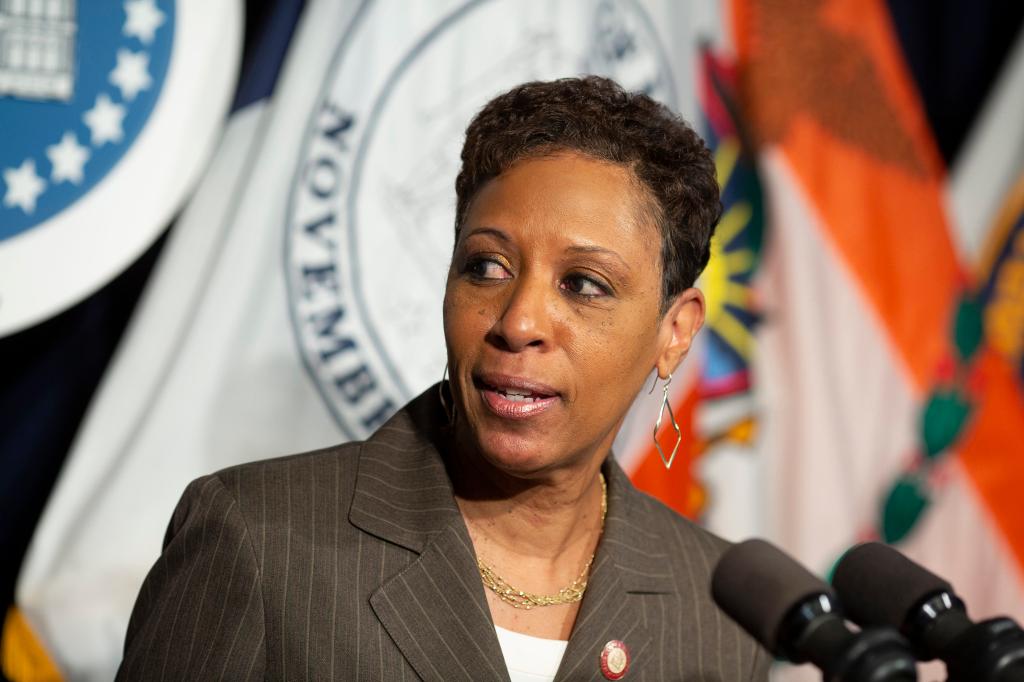 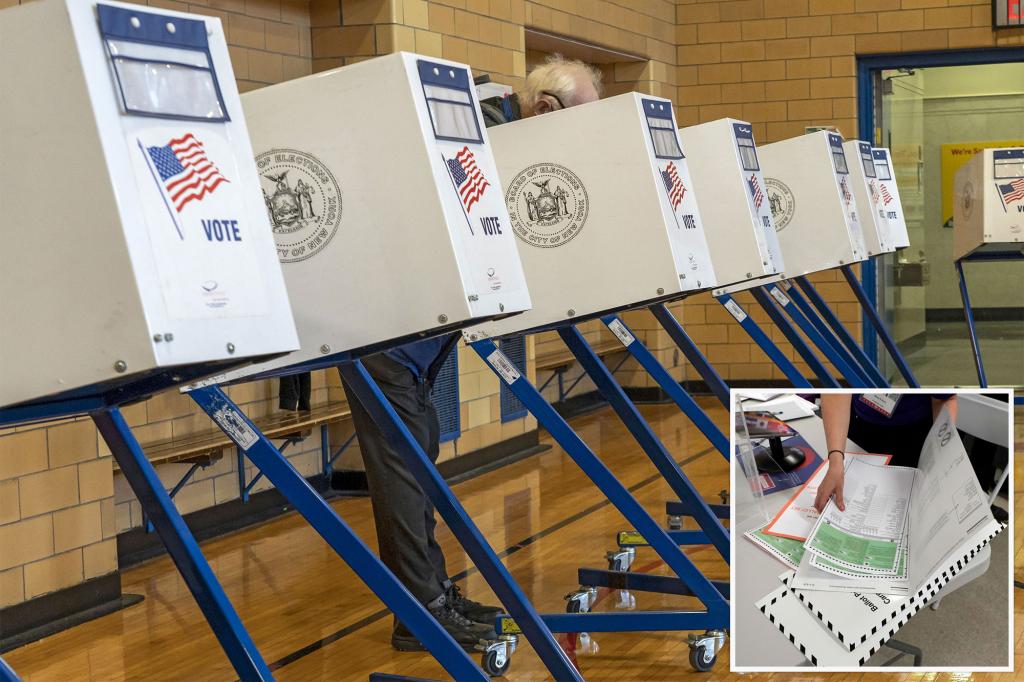 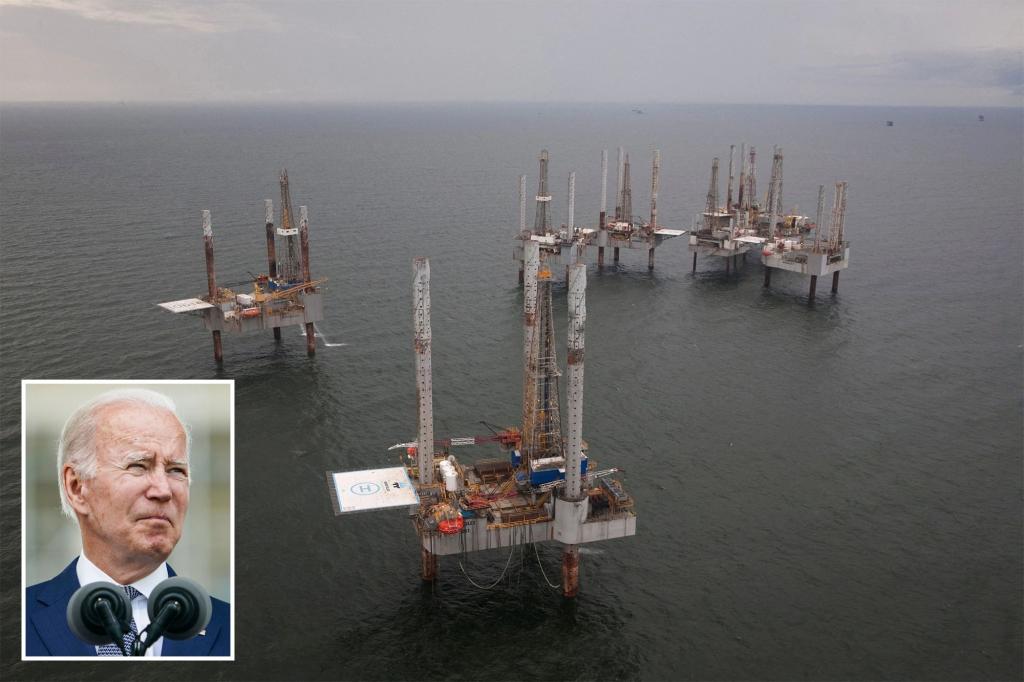