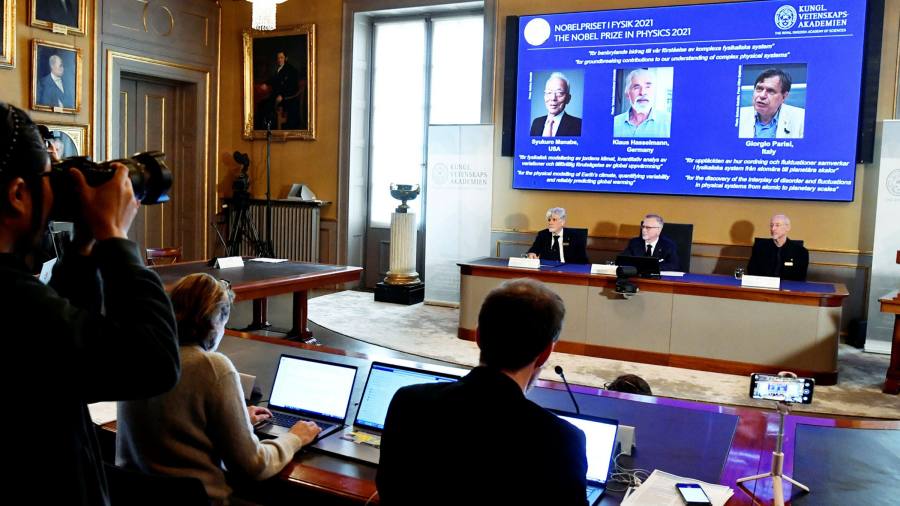 This year’s Nobel Prize in physics is shared by two pioneering scientists whose research led to the first reliable predictions of global warming and a third who extended the emerging understanding of climate to other complex physical systems.

Syukuro “Suki” Manabe of Princeton University in the US, and Klaus Hasselmann of the Max Planck Institute for Meteorology in Germany worked during the 1960s and 1970s to lay the foundations for the physical modelling of Earth’s climate.

The idea of the “greenhouse effect” — that adding carbon dioxide would warm up the atmosphere — dates back to the 19th century. But Manabe, who is 90, and Hasselmann, 89, converted it into realistic computer models of the way human activities affect climate.

The third laureate, Giorgio Parisi of Sapienza University of Rome, during the 1980s developed a wider understanding of the way hidden patterns can be detected in the disorder and fluctuations within climate and other complex systems. His research has ranged from the timing of ice ages to the structure of inorganic materials, animal behaviour and now the Covid-19 pandemic.

Like many previous Nobel prizes, the awards recognise research carried out several decades ago, the significance of which is now becoming clear.

“The discoveries being recognised this year demonstrate that our knowledge about the climate rests on a solid scientific foundation, based on a rigorous analysis of observations,” said Thors Hans Hansson, chair of the Nobel Committee for Physics.

Parisi, 73, told the Nobel announcement press conference in Stockholm that he had a message for world leaders ahead of the COP26 climate conference in Glasgow next month. “It’s clear for future generations that we have to act now,” he said. “It’s very urgent that we take very strong decisions and move at a very strong pace” to tackle climate change.

“There are some details we still have to understand but the strength of climate change is clear,” Parisi added. “When more energy is in the atmosphere, that increases the chance of extreme [weather] events very strongly.”

Most Nobel laureates express surprise after the announcement but Parisi said: “I knew that I had some chance so I kept the phone near me this morning. I was not expecting it but I knew there was a non-negligible possibility [of winning].”

Climate scientists welcomed the prizes for Hasselmann and Manabe. “They were pioneers in this area and personal role models for me,” said Stefan Rahmstorf, a leading German climatologist at the Potsdam Institute for Climate Impact Research. “We are now witnessing how their early predictions are coming true one after the other.”

Michael Moloney, chief executive of the American Institute of Physics, said: “Nearly every climate model used today relies on the groundbreaking research done by Syukuro Manabe, whose pioneering work explored the interaction between radiation balance and the vertical transport of air masses, and Klaus Hasselmann, who was the first scientist to directly link weather and climate into a single model and explain why climate models can be predictable.”

The physics award is the second of this year’s six Nobels to be announced. On Monday, two US scientists won the medicine prize for discoveries about our sense of touch. The prizes for chemistry, literature, peace and economics will be announced over the coming week.