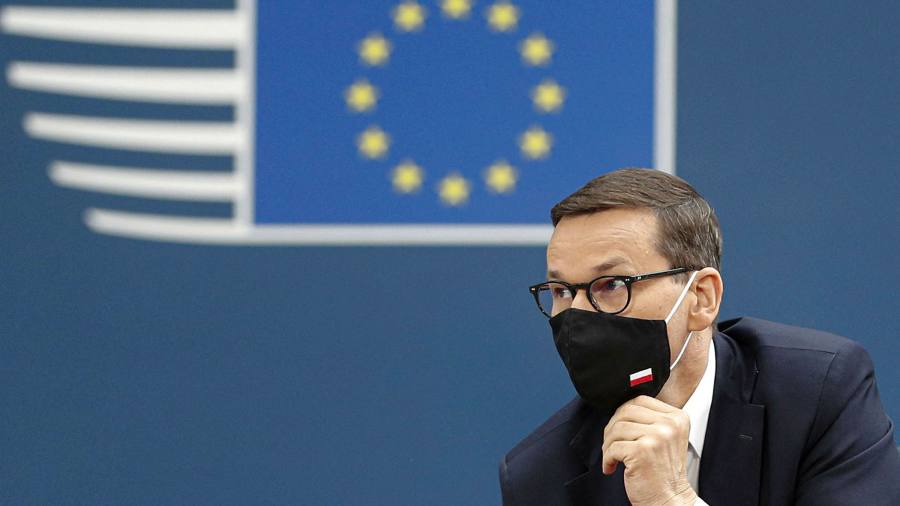 Polish PM warns of an EU ‘deprived of democratic control’

The EU risks becoming a “centrally managed organism run by institutions deprived of democratic control”, Poland’s prime minister has warned amid an escalating battle over the rule of law between Warsaw and Brussels.

In a letter to EU heads of government published on Monday, Mateusz Morawiecki insisted Poland remained “a loyal member” of the union, which it joined in 2004. But he warned against penalising member states financially — as the commission is considering doing in its stand-off with Poland — and said that EU institutions exceeding their power was “dangerous to the continuation” of the union.

The Polish prime minister was writing ahead of an appearance on Tuesday before the European Parliament in Strasbourg at which he is expected to reiterate his defence of Poland’s handling of rule-of-law issues. Ursula von der Leyen, the European Commission president, is due to speak in the same debate.

Warsaw and Brussels have spent much of the past five years at odds over changes by Poland’s ruling Law and Justice party (PiS) that give politicians sweeping powers over the judiciary, and which the commission regards as posing a fundamental threat to judicial independence.

“Unfortunately, today we are dealing with a very dangerous phenomenon whereby various European Union institutions usurp powers they do not have under the treaties and impose their will on member states,” Morawiecki wrote in the letter.

“This is particularly evident today as financial tools are being used for such a purpose. Without any legal basis, there is an attempt to force member states to do what the institutions of the union tell them to do — irrespective of any legal basis for imposing such demands. Such a practice cannot be accepted. ”

Morawiecki’s letter and his speech to a chamber of what will probably be mostly hostile lawmakers on Tuesday are a response to what one Polish official said was “the language of open blackmail” from those calling for financial penalties against Warsaw.

“We are treated unfairly. [He] will defend principles and Poland’s status in the EU,” the official said. “It is up to our opponents how it will go.”

In a sign of the hardline mood in Warsaw, Poland’s justice minister, Zbigniew Ziobro, said on Monday that he would ask the government to submit a request to the ECJ to assess the independence of Germany’s judges.

“Since the EU is based on the equality of all its states and citizens, it is necessary to assess the situation in Germany, where the choice of judges to their equivalent of the supreme court is of a completely political nature,” he wrote on Twitter.

“If EU institutions are casting doubt on the independence of judges in Poland, what is there to say about German judges[?]”

The commission has a number of tools at its disposal as it seeks to hold the line on rule-of-law matters. These include bringing a new infringement action over the Polish tribunal ruling. It has also thus far withheld approval of Poland’s €36bn bid for EU recovery fund money, which Warsaw submitted in early May.

Brussels is also debating when to take initial steps in deploying a new conditionality mechanism permitting the commission to withhold funding to member states where breaches of the rule of law affect the budget or financial interests of the union.

The parliament’s legal affairs committee last week recommended that the commission be taken to court for failing to act despite several alleged rule-of-law violations.

Rasmus Andresen, a German Green MEP, said the commission’s approach had been “quite disappointing”, as he called for von der Leyen to go beyond “strong words” on Tuesday. “We need to see a tougher line,” he said. “The commission has already waited too long. Now it is time to act.”

More than 5 tons of cocaine seized in Atlantic operation