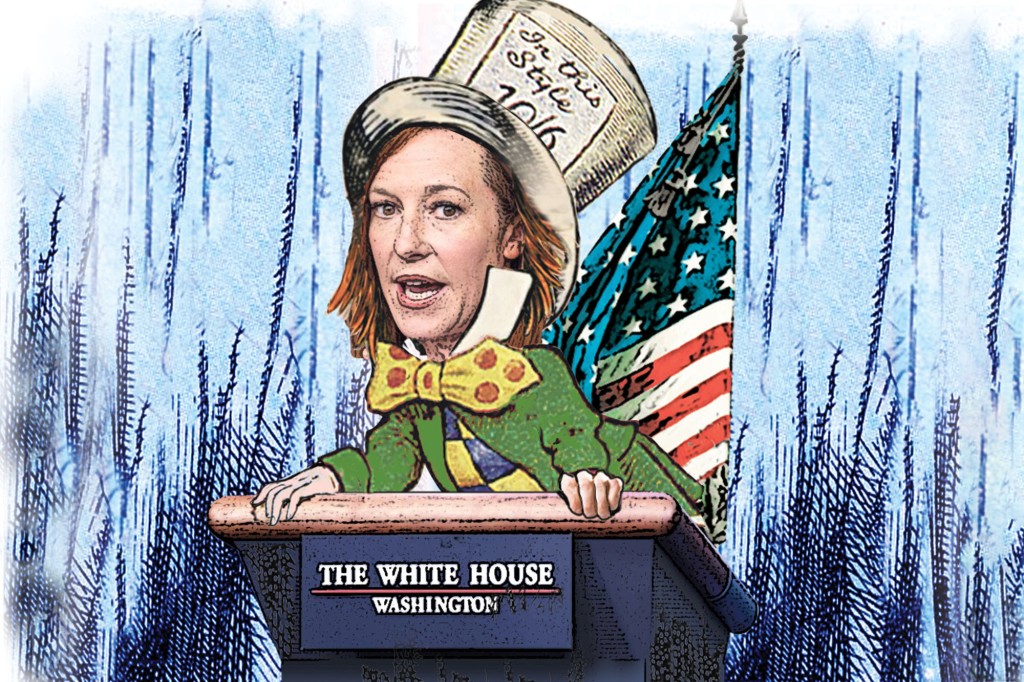 Rumor has it that Alice is preparing to apply for a job in the White House press office.

And not a moment too soon, either, for, having ­offered himself up as the savior of the American way, President Biden now finds himself in something of a pickle.

The jobs reports are lackluster. The border is a mess. Gas prices are sky high. Our supply chains are broken. Inflation, which was supposed to be “transitory,” looks more persistent by the day. Americans remain stranded in Afghanistan. China’s testing space nukes. COVID is not only still with us; it’s making its way into the Good States. And, despite its having been given a jolly, catchy name — the “Build Back Better agenda” — all the public seems to know about the president’s gargantuan spending plan is that it will cost trillions upon trillions of dollars.

Down the rabbit hole, though, everything is still peachy.

Indeed, insofar as America has any problems to speak of, they’re held to be either nonexistent, inconsequential, or somehow your fault. You may think you watched in horror a few months ago as a generational debacle unfolded in Kabul, but what you actually saw was “the largest US airlift in history.” Hurrah!

You may believe that the southern border has been in a perpetual state of crisis from the moment Biden took office, but this is merely the sort of quotidian “circumstance” that could have happened under any president and is only happening now due to the inexplicable vagaries of climate change. How unfair!

On first glance, you might think it more than a little startling that the Chinese Communist Party has managed to contrive a cache of hypersonic nuclear weapons that, if deployed correctly, would zip right past our defenses, but what you’re for some reason missing is that when it comes to the prospect of a nuclear apocalypse, “stiff competition” between nations is “welcome.” Natch.

That inflation you’re worried about? It’s not going to happen, says the president. Or, at least, if it does happen, it’ll be because the government wasn’t permitted to spend enough of your cash. And anyhow, when you really think about it, inflation is a pretty “high-class problem” to have, isn’t it? In that sense, it’s a little like ­supply-chain disruptions, which you might well believe have the potential to seriously inconvenience you, but which, Transportation Secretary Pete Buttigieg confirms, are ­really just the positive byproducts of Biden’s having “successfully guided this economy out of the teeth of a terrifying recession.”

Asked today about the potential impact that this successful economic guidance might have on the delivery of consumer products going forward, White House press secretary Jen Psaki explained that we don’t really need a functioning market anyhow. No one, she sniffed, should shed any tears at “the tragedy of the treadmill that’s delayed.”

Bothered by this approach? There’s no need to be. Instead, relax into what The Washington Post’s Micheline Maynard submits should be your “new, more realistic expectations” for the future. “American consumers,” Maynard points out, have been “pampered and catered to for decades,” to such an extent that their first reaction to deteriorating economic conditions may well be to engage in an unacceptable and “spoiled” “whine” rather than to simply “make adjustments” so that the president’s feelings might be spared.

Oh, and while you’re at it, you might take a moment to appreciate the sheer ingenuity of the alchemy by which this administration has man-aged to transmute $3.5 trillion into $0 through good intentions alone. Previous generations — the ones that sat around worrying about treadmills delayed in transit, no doubt — had to face hard questions, such as how best to raise the money they wanted to spend on public services. Our generation, by a striking piece of luck, can just insist those choices away with incantations. What a trick!

It’s so devilishly clever, in fact — and so terribly simple to boot — that one can’t help but wonder why it hadn’t been thought of until now.

Then, having handily dispatched one’s enemies, one can simply move on to the next objection, which, yes, might be based on things that people are actually seeing, but which is equally ill-founded, for reasons that will be decided upon by Twitter within the next few days.

Alice, she says, is able to believe “six impossible things before breakfast.” Looks as if she’ll get the job.

Why does White House stay silent on migrant flights?: Devine