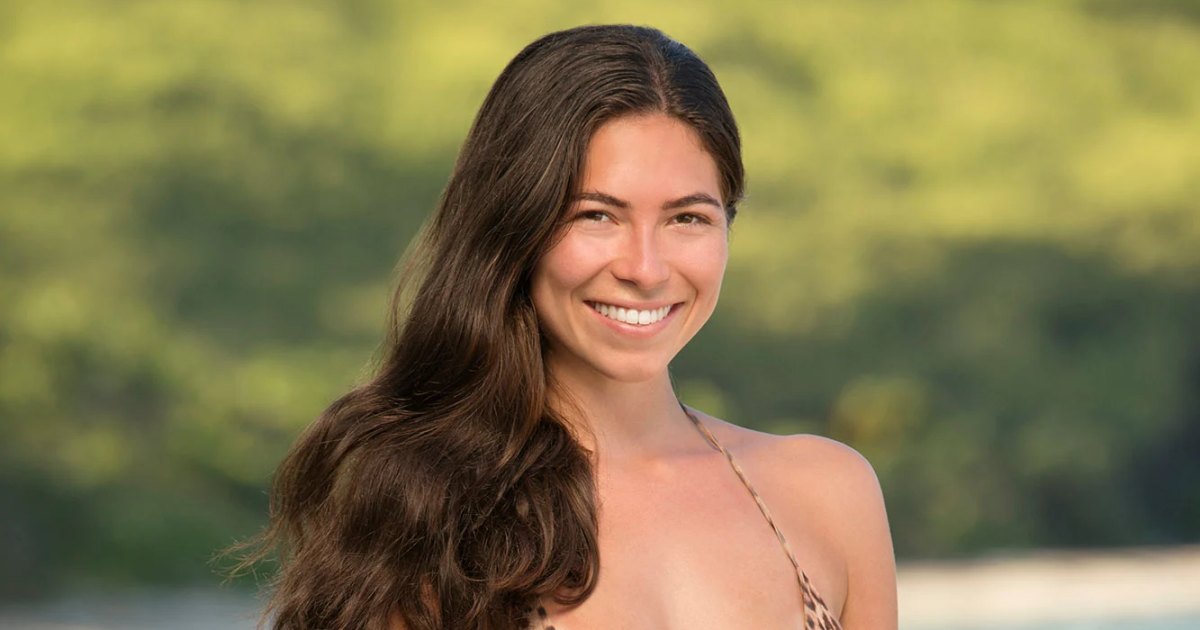 in Magazine
Reading Time: 9 mins read
A A

Just a tad salty. Sydney Segal was not exactly thrilled when she became “unfortunate collateral” of a controversial twist and voted out of Survivor 41 on Wednesday, November 3.

The law student, 26, spoke to Us Weekly the morning after her elimination and still had a lot to say about her demise in the game.

“The only way they could’ve gotten me out was with, like, 15 advantages and a twist, that’s like the stupidest s—t ever,” Sydney told Us exclusively. “So yeah, that’s sick. I wasn’t outwitted, outlasted, outplayed. I was out f—king lucked.”

Still, the Brooklyn native has “no hard feelings” toward Erika Casupanan, who smashed an hourglass in a twist offered by host Jeff Probst to change the results of the immunity challenge. While it gave Erika safety, it put everyone who had won the challenge at risk of going home.

Sydney added, “And now your ratings are gonna f—king plummet because your big personality is gone.”

Scroll down to read our full exit interview with Sydney…

Us Weekly: How are you feeling this morning? How was it watching it back last night?

Sydney Segal: It was different than I thought. I was ready for it, but I was like, “God, I have this revived hate for everyone, which is, like, not healthy for like my zen, mental self.” But whatever.

Us: Was it as chaotic as you remember?

SS: Yeah, it was. I definitely remember how I felt and my senses, and the sensory overload in the moment. But, luckily, I was just really tired, so I really didn’t care at that point.

Us: Was it an extra long tribal?

SS: I don’t even remember it being that long, but tribal, in general, is later after sundown. Usually, you go to bed after sundown, so it’s like you’re already up past bedtime and then keep staying up, and tribal, and theoretically go back. I’m like, “Ah, I’m tired.” It was like episode three on that boat. I was like, “I don’t want to sneak off this island. I’m f—king tired.”

Us: With all the idols and advantages it seems tribal could have went a few different ways. You knew your name was out there, but how were you feeling before tribal?

SS: I think it could have gone one way and it was me just ‘cause where the idols were placed. I was the unfortunate collateral. And when we did get back to the beach, obviously we’re going to Naseer but everyone’s so f—king dumb. They’re like, “He’s going to play the idol so we can’t vote for him.” I was like, “Yeah, but now he’s going to know that we’re not going to vote for him because we think he’s gonna play the idol and he’s not going to play the idol.” Let’s just be f—king dumb, which is what they were. But whatever, that aside, Deshawn and Evvie were the names that were thrown out. So I’m like, “This is sick.” But, once the tribal went live and I kind of knew where the idols were, and how the alliances had shaped out, I was like, “I’m actually the only option.” So, I played the Shot in the Dark with no regrets. I really just didn’t think my vote mattered that much. And I thought that it was going to go all one way or all another way. So, it was a good metaphor for my self-awareness. I was good at reading the room.

Us: Did you know you were going to play it or did you decide at tribal once things got a little crazy?

SS: I did not think about playing it before. Even when Jeff introduced Shot in the Dark, I was like, “Yeah, I’m not gonna play that s—t.” I just acted like it doesn’t exist. So it was funny that I ended up using it. Once the tribal went live, I’m like, “Dude, f—k this. I don’t even like these people. I don’t trust them. I’d rather my fate be in God’s hands and not in any of these losers’ hands.” So that’s what I did. And God did me dirty, but everything happens for a reason. Right?

Us: I mean, even if you didn’t play it and you had your vote, and voted for Evvie, it would have been a tie. I think? I don’t know. I’m still confused by the whole situation.

SS: Yeah, it would have been a tie and Evvie probably would have gone home. But still, during this whole process of, like, mourning Survivor, I never post-mortemed a single decision because you have to put yourself in the mindset of where you were in that moment. And in that moment, I had no reason to think that I was either safe or my vote was going to matter. So, I might as well just use the Shot in the Dark. The worst thing in the world is going home with something in your pocket.

Us: Was it extra frustrating knowing how close you were to winning immunity?

SS: Yeah. Ricard’s a dancer, so it’s vindicating to know that I almost won immunity, but I lost to a dancer. Right? The only way they could’ve gotten me out was with, like, 15 advantages and a twist, that’s like the stupidest s—t ever. So yeah, that’s sick. I wasn’t outwitted, outlasted, outplayed. I was out f—king lucked.

Us: Who do you feel the most betrayed by?

SS: It’s funny, I don’t feel betrayed by anybody because everybody that I wanted to work with – which was Danny, Deshawn, Tiffany, Evvie and Xander – none of them voted for me. So I would say to Deshawn because he’s the only one that really threw my name out of those five, but he ended up using his extra vote against Evvie. So I can’t even say that. He did try to save me. I was exactly where I wanted to be strategically. I was liked by almost everybody but not everybody. Evvie and Deshawn were liked by everybody, therefore they’re on the chopping block. I wanted to be in the middle of two alliances. I didn’t want to be in an alliance where people needed, like, that person. I could have theoretically been f—ked over. And that’s exactly where I was. So, every relationship that I chose to foster really did have my back. And, like I said, it was out-lucked. Because when you talk about outplay, I played exactly the way I wanted to play. I wasn’t playing to lose, so it was a good strategy.

Us: What did you think about Erika’s decision? Would you have done the same thing?

SS: I was like, “Shocker, you broke it.” I would have done the same thing. Jeff wouldn’t have even had to be done explaining it before I’d be like, “Alright, break. Next. Easiest decision of my life.” So I harbor no hard feelings for that decision. I just think the whole point of the advantage was to get out a strong player because that challenge was meant to be won by strong players. And then that twist was meant to get a strong player out, and congrats, CBS, it worked. And now your ratings are gonna f—king plummet because your big personality is gone.

Us: We saw Danny was upset by this twist. What was the vibe back at camp?

SS: Yeah. I mean, no one was happy, but I don’t think anybody blamed Erika. Danny was by far the most upset. And that’s something they didn’t show at tribal, just this whole back and forth between Jeff and Danny where Danny’s like, “You played for something. And we played for something.” And that something is never called into question. You don’t win the Super Bowl and be like, “Sike, give me your ring back.” That’s not how it works. So, it was so hard for him to wrap his mind around, as someone who did play professional sports. For me, nothing in the games surprises me. And that’s what they didn’t even show my face. Obviously, I’m the only one that’s going to notice that detail. When Jeff was explaining it, Deshawn’s mouth is to the floor. Evvie’s eyes are wide open. I’m like, “OK, duh.”

Us: How are you and the cast today? Any bad blood or are you friendly?

SS: It kind of goes back and forth. When I think of the cast as a whole, I’m like, “OK, I literally never want to see you again in my life.” When I think of each individual, that’s like family. I do have good relationships with most everybody. And obviously, there’s tiers. There’s people I would do anything for, people I would keep in touch with and people that if I never saw you again in my life, that’d be too soon.

Us: Would you ever want to play again?

SS: Yes. I think everyone should boycott Survivor until they bring me back. But I think I would play to, like, live on an island, do the challenges, win a million dollars. Less like, “Oh, my God, twists! Idols! Survivor bucket list! Fire! Flint!” F—k that. If I’m going to win, I want to be on an island. I’m a mermaid so put me back in my element. So please, boycott until I get back.

Us: Speaking of all these advantages and idols, what did you think of Xander giving a fake one to Liana?

SS: I was supposed to be the beneficiary of that plan. So I was, again, not surprised because nothing surprises me at this point. But I was like, “Go Xander.” He just clowned her. Like, as much as it sucks to be me yesterday, it’s sucks to be Liana. She got out f—king clowned. I got out-collateral damaged. But, she got clowned.

Us: Do you think there was anything you could’ve done at tribal to stay in the game?

SS: Maybe but … honestly, it was a live tribal and I just didn’t get up for a while. So, if I got up and had a couple more conversations, that might’ve helped. I think I maybe could have talked to Danny and Deshawn in that moment a little more, to try to get Shan and Liana to vote for Evvie. I didn’t talk to either of them, but I was just … I didn’t feel betrayed by them but I definitely felt like they became more partial to Liana and Shan instead of me. So, at that tribal, I really didn’t interact with them as much as maybe I could have. But, at the end of the day, they still had my back so who knows? That probably wouldn’t have made a difference and I really didn’t care to talk to Shan or Liana.

Us: Shan and Liana did tell you several times that you were good. Were you ever buying that?

‘Psych’ Cast: Where Are They Now?

Stars Reveal What They Took From Movie, TV Sets

Derek Jeter Gets Makeover From His Daughters: Photo