The Every Company gets $175M investment

As the possibilities of animal-free protein become more evident, it’s only fitting that the company leading the path toward making a chicken-free egg gets the kind of funding needed to concentrate on a massive upscaling effort. This funding round more than triples the amount that The Every Company has raised since its 2014 founding, and gives the company fuel toward the future.

“The global demand for alternative proteins has grown substantially, but the infrastructure needed to produce the necessary ingredients has yet to catch up. Every’s platform is a big step towards filling that gap,” Katrin Burt, managing partner of Grosvenor’s Wheatsheaf Group, said in a written statement.

So far, The Every Company has gone a step farther with its products. ClearEgg isn’t reproducing something readily available from chicken eggs. It’s a tasteless, odorless, nearly colorless and highly soluble protein that is said to work well as a nutrition add to any beverage. The protein itself is only available in extremely small amounts from eggs, meaning it would be cost-prohibitive for any traditional producer to turn it into a standalone product.

While ClearEgg is relatively novel, co-founder and CEO Arturo Elizondo previously said The Every Company is also working on other egg white protein ingredients that can perform the more conventional functions of eggs, including gelling, whipping and binding. In October, he said he expected a launch of this type of ingredient in the next quarter.

It’s imperative for The Every Company to work toward increasing its capacity in order to bring production costs down to the point where they are competitive with animal agriculture. The company has been working on the issue, partnering with AB InBev’s venture and innovation arm ZX Ventures this spring to develop a way to ferment these types of proteins at greater scale. When ClearEgg became available, Elizondo said they had recently increased production and could make tens of thousands of metric tons every couple of months. He said that there were aggressive plans to expand capacity within six months, which this funding could enable.

This funding round also gives The Every Company an easy in at thousands of restaurants. Henry McGovern is the founder of both lead investor McWin — which invests in foodservice and food tech — and global foodservice giant AmRest — which operates more than 2,300 restaurants globally. In the statement, McGovern said that McWin is “uniquely equipped to support Every’s ambitious plans to bring its products to menus worldwide.”

Foodservice is a good testing ground for this type of new-to-the-world product. And The Every Company wouldn’t be the only precision fermentation company meeting consumers there. Last month, Starbucks announced it would trial animal-free milk from dairy fermentation company Perfect Day at a pair of Seattle locations. Getting a single foodservice item with a new ingredient is less commitment for a consumer than a full product at a grocery store. As consumers find animal-free and traditional milk are identical in their coffee drinks, it could lead them to be more accepting of CPG products with animal-free protein. 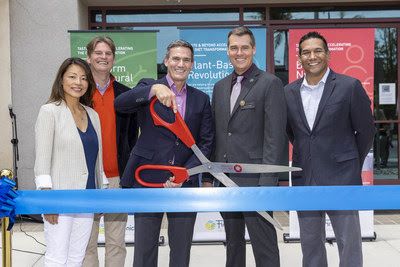