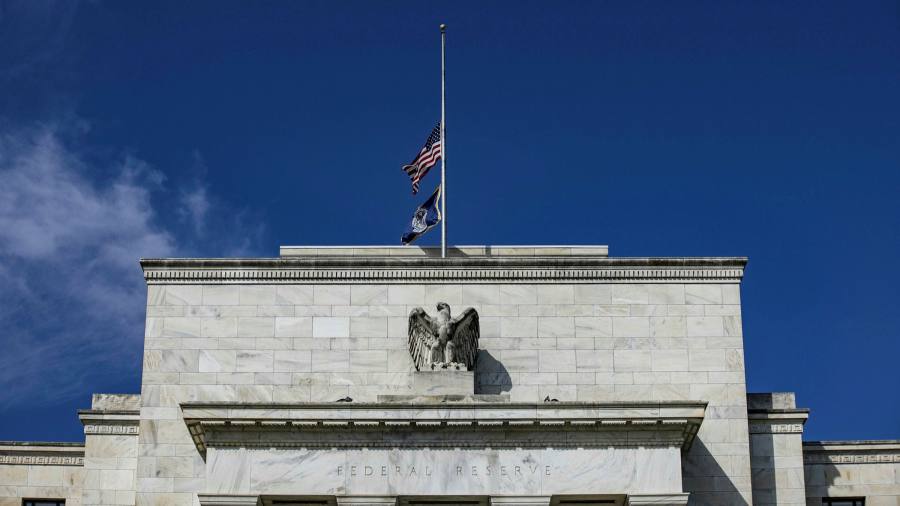 US equities fell on Monday after ending last week with their worst performance since February as an oil price rally heightened concerns about inflation and the future path of interest rates.

Wall Street’s blue-chip S&P 500 index was down 1.5 per cent at midday in New York. The technology-focused Nasdaq Composite, which houses companies whose high valuations can make their share prices more sensitive to anticipated changes in interest rates, fell 2.4 per cent.

“We’re in an environment that feels like the opposite of Goldilocks,” said Cosimo Marasciulo, head of investment absolute returns at fund manager Amundi, referring to an economic environment where growth is healthy but inflation is contained. “We could be getting upwards pressure on inflation and on interest rates.”

In Europe, the Stoxx 600 index closed down 0.5 per cent, following a 2 per cent decline last week. London’s FTSE 100 was down 0.2 per cent. Hong Kong’s Hang Seng share index had earlier ended the day 2.2 per cent lower.

Those stock market moves came as Brent crude oil jumped 3.1 per cent to a three-year high of $81.74 a barrel as producer group Opec+ stuck to existing output plans at its latest meeting, despite a surge in natural gas prices increasing oil demand. Members had agreed this summer to add 400,000 barrels a day of production each month until the end of next year.

West Texas Intermediate, the US oil benchmark, hit $78 a barrel, its highest level since 2014.

The yield on the benchmark 10-year US Treasury note, which has been suppressed by heavy buying of government debt securities by a Federal Reserve keen to lower borrowing costs through the pandemic, rose 0.04 percentage points to 1.505 per cent.

This yield, which moves inversely to the note’s price, has climbed from about 1.3 per cent in late September as prolonged inflation and job market improvements fuelled expectations of the Fed reducing its $120bn-a-month stimulus package.

US economic output is expected to moderate after a coronavirus vaccine-driven bounce in the first months of the year. Investors, meanwhile, have been gripped by the prospect of economic stagflation amid high energy prices and severe supply chain disruptions caused by pandemic curbs and worker shortages.

Fed chair Jay Powell has signalled that the central bank will in November announce plans to reduce its monthly bond purchases after seeing progress in the labour market.

The next US non-farm payrolls report, due on Friday, would “probably be the catalyst to cement the November taper”, said Deutsche Bank strategist Jim Reid. Analysts polled by Bloomberg expect to see that US employers hired almost half a million new workers last month.

The dollar index, which measures the US currency against six others, fell 0.2 per cent after touching a one-year high last week. Sterling added 0.4 per cent to $1.361.

The New Zealand dollar gained 0.2 per cent against its US counterpart to $0.696. The Reserve Bank of New Zealand, which holds its next monetary policy meeting on October 6, is widely expected to raise borrowing costs by a quarter of a percentage point to combat rising inflation.

Stars Who Spoiled Their Own Movies, Shows Over the Years